BATON ROUGE – For the first time, scientists have observed ripples in the fabric of spacetime, called gravitational waves, arriving at the 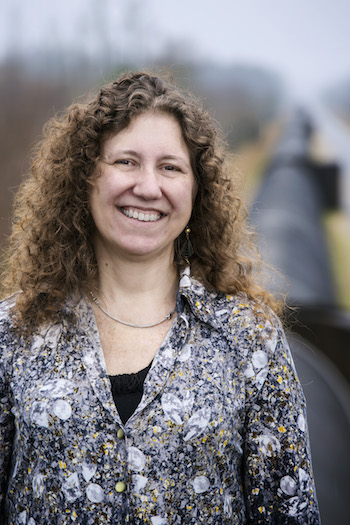 LSU Physics & Astronomy Professor Gabriela González is the elected spokesperson for the LIGO Scientific Collaboration, a group of more than 1,000 scientists who have been working toward the detection of gravitational waves.

earth from a cataclysmic event in the distant universe. This confirms a major prediction of Albert Einstein’s 1915 general theory of relativity and opens an unprecedented new window onto the cosmos.

Gravitational waves carry information about their dramatic origins and about the nature of gravity that cannot otherwise be obtained. Physicists have concluded that the detected gravitational waves were produced during the final fraction of a second of the merger of two black holes to produce a single, more massive spinning black hole. This collision of two black holes had been predicted but never observed.

The gravitational waves were detected on Sept. 14, 2015, at 4:51 a.m. CST by both of the twin Laser Interferometer Gravitational-wave Observatory, or LIGO, detectors, located in Livingston, La., and Hanford, Wash. The LIGO Observatories are funded by the National Science Foundation, or NSF, and were conceived, built and are operated by Caltech and MIT. The discovery, accepted for publication in the journal Physical Review Letters, was made by the LIGO Scientific Collaboration, which includes the GEO Collaboration, the Australian Consortium for Interferometric Gravitational Astronomy and the Virgo Collaboration using data from the two LIGO detectors.

On Sept. 14, the LIGO instrument in Livingston, followed 7 milliseconds later by the instrument in Hanford, detected a gravitational wave signal from colliding black holes. The near simultaneous detection was necessary to confirm that the event was real, and indicated based on the relative time of arrival of the signals traveling at the speed of light, that the source was located in the southern hemisphere sky.

According to General Relativity, a pair of black holes orbiting around each other lose energy through the emission of gravitational waves, causing them to gradually approach each other over billions of years, and then much more quickly in the final minutes. During the final fraction of a second, the two black holes collide into each other at nearly one-half the speed of light and form a single more massive black hole, converting a portion of the combined black holes’ mass to energy according to Einstein’s formula E=mc2. This energy is emitted as a final strong burst of gravitational radiation.

Based on the physics of this particular event, LIGO scientists estimate that the two black holes in this event were about 29 and 36 times the mass of the sun, and that the event took place 1.3 billion years ago. About three times the mass of the sun was converted into gravitational waves in a fraction of a second—with a peak power output about 50 times that of the whole visible universe. LIGO observed these gravitational waves.

The LIGO Livingston observatory is located on LSU property, and LSU faculty, students and research staff are major contributors to the 15-nation international LIGO Science Collaboration, or LSC. More than 1,000 scientists from universities around the U.S. and 14 other countries conduct LIGO research as members of the LSC. More than 90 universities and research institutes in the LSC develop detector technology and analyze data; about 250 students are strong contributing members of the collaboration. The LSC detector network includes the LIGO interferometers and the GEO600 detector. The GEO team includes scientists at the Max Planck Institute for Gravitational Physics (Albert Einstein Institute, AEI), Leibniz Universität Hannover along with partners at the University of Glasgow, Cardiff University, the University of Birmingham, other universities in the United Kingdom and the University of the Balearic Islands in Spain.

Gabriela González, LSU professor of physics and astronomy, is the elected spokesperson, and leads the LSC. Together with other leaders and founders of the LIGO effort, González made the official statements and took questions starting on Thursday, Feb. 11, at the National Press Club in Washington, D.C., before gathered national science press. The announcement was also live streamed online.

“This detection is the beginning of a new era. The field of gravitational wave astronomy is now a reality,” González said.

“This first detection of gravitational waves owes its existence to the hard work over many years by hundreds of scientists, engineers and operations staff members. The breathtaking observation of a never-before-observed system of black holes had earned LIGO its `O’ as a completely new kind of astronomical observatory,” Giaime said.

LSU’s pioneering role in this science began in 1970 with the arrival of William Hamilton, now professor emeritus, who along with Physics Professor Warren Johnson, built and operated previous-generation cryogenic bar gravitational wave detectors on campus for many years. LSU Assistant Professor Thomas Corbitt focuses his research on advanced quantum metrology techniques for a future detector. This represents more than 45 years of cutting-edge research, with state and institutional commitment, and long-standing multimillion dollar support from NSF producing educational opportunities for students and postdoctoral researchers, several of whom have gone on to professorial appointments around the world.

Both the Livingston and Hanford observatories function as L-shaped interferometers in which laser light is split into two beams that travel back and forth down 2.5 mile, or 4 kilometer, long arms that are 4 feet in diameter tubes kept under a near-perfect vacuum. The beams are used to monitor the distance between mirrors precisely positioned at the ends of the arms. According to Einstein’s theory, the distance between the mirrors will change by an infinitesimal amount when a gravitational wave passes by the detector. A change in the lengths of the arms smaller than one-ten-thousandth the diameter of a proton, or 10-19 meter, can be detected.

Virgo research is carried out by the Virgo Collaboration, consisting of more than 250 physicists and engineers belonging to 19 different European research groups: six from Centre National de la Recherche Scientifique, or CNRS, in France; eight from the Istituto Nazionale di Fisica Nucleare, or INFN, in Italy; two in The Netherlands with Nikhef; the Wigner RCP in Hungary; the POLGRAW group in Poland and the European Gravitational Observatory, or EGO, the laboratory hosting the Virgo detector near Pisa in Italy.

The discovery was made possible by the enhanced capabilities of Advanced LIGO, a major upgrade that increases the sensitivity of the instruments compared to the first generation LIGO detectors. Advanced LIGO increased the volume of the universe probed and enabled the discovery of gravitational waves during its first observation run. NSF leads in financial support for Advanced LIGO. Funding organizations in Germany (Max Planck Society), the U.K. (Science and Technology Facilities Council, STFC) and Australia (Australian Research Council) also have made significant commitments to the project.

Gravitational waves: 'we can hear the universe'
The Guardian

IT'S OFFICIAL: Gravitational waves have been detected, Einstein has been proved right
Science Alert

Einstein’s was right, gravitational waves do exist
Times of India

In scientific breakthrough, a ‘win’ for the value of wonder
MPR News

Physicists make a breakthrough after a century-long search
Inverse