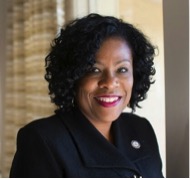 "A journey of a thousand miles starts with a single step."

Sharon Weston Broome's journey as a public servant has spanned over two decades. Her first step as a councilwoman has led to her election as the first woman elected mayor-president of Baton Rouge and East Baton Rouge Parish.

Over the years, Broome has been recognized for her service and leadership by several organizations, including the Louisiana Coalition Against Domestic Violence, Louisiana Health Freedom Coalition, the American Heart Association, Every Child Matters and Morehouse College.

Faith and family are a priority for Broome. She is a member of Star Hill Church, and is happily married to Marvin Broome. They are the proud parents of three children and three grandchildren.

Early in her journey, Broome was cited by the Baton Rouge Business Report as one of the "Top 25 Most Influential Women Leading the Way in the Capital City." Today she continues to lead as she encourages everyone to join her in building a "new Baton Rouge," a place where people from all walks of life can see and seize positive opportunities.