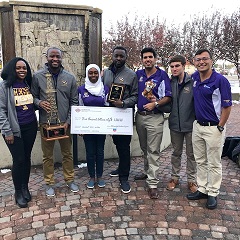 LSU wins PetroBowl competition at Society of Petroleum Engineers Annual Technical Conference and Exposition (SPE ATCE) in Calgary, AB, Canada on Monday, September 30, 2019.  Thirty-two teams from universities around the world qualified for the competition and travelled to Calgary to compete in this international competition, which pits teams against each other to test both technical and nontechnical knowledge of petroleum engineering concepts.

The team would like to thank the individual donors who contributed to their travel costs for the PetroBowl fund, and especially SafeKick for all the support.  The department is very proud that this team, dubbed the "Dream Team" by their SPE colleagues, for this honor.