To the Moon and Back 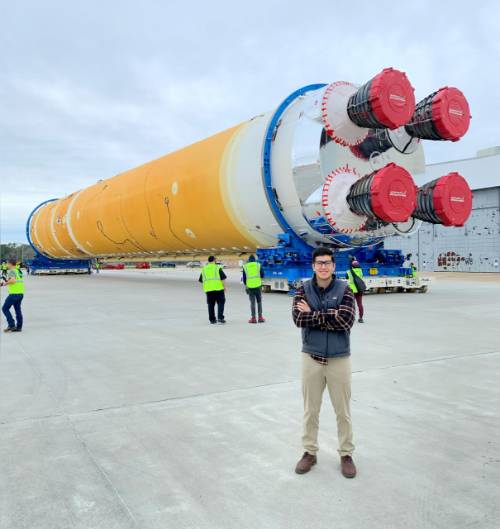 BATON ROUGE, LA – On Jan. 16, LSU Engineering alumnus Alex Cagnola fulfilled a lifelong dream by serving as a core stage engineer during NASA’s Space Launch System (SLS) Green Run Hot Fire Engine Test for the Artemis Rocket, one of NASA’s largest and most powerful rockets. This unprecedented test run was a precursor to a series of Artemis missions that will ultimately put astronauts back on the moon and, one day, on Mars.

Cagnola, who graduated from LSU in 2014, will be a part of three NASA Artemis missions over the next few years. Artemis I, which will launch in late 2021, will send an unmanned Orion capsule to circumvent the moon and return to Earth. Artemis II, which is currently in production at the Michoud Assembly Facility in New Orleans, will send astronauts to circumvent the moon and return to Earth in 2023. Artemis III will send the first woman and the next man to land on the moon in 2024.

“These missions will take astronauts farther out beyond the moon, farther into deep space than any human has ever traveled before,” Cagnola said. “We eventually want to land on Mars, which is more than 140 times farther from Earth than the moon. The moon is a good place to do some real hard science and learn about how astronauts would react to living on another planetary body for a certain period of time.”

To power the Artemis missions, NASA built the SLS rocket, which consists of the core stage between two solid rocket boosters, an upper stage, the Orion crew capsule, and the launch abort system.

“The core stage is the powerhouse of our entire Space Launch System,” Cagnola said. “Artemis has unprecedented power and capability that offers more energy, volume capacity, and payload mass than any other rocket built today.”

The SLS Core Stage, also known as the backbone of the rocket, is 212 feet long, 27.6 feet in diameter, and consists of five parts—a massive tank that holds 537,000 gallons of liquid hydrogen cooled to -423°F; a slightly smaller tank that holds 196,000 gallons of liquid oxygen cooled to -297°F; an intertank that joins the two propellant tanks, which houses avionics and electronics and is where the solid rocket boosters attach at the top of the core stage; a forward skirt that houses flight computers, cameras, and avionics, also known as the “brains” of the rocket; and the engine section that delivers propellants from the tanks to four RS-25 engines, has avionics to steer engines, and serves as the aft booster attach point.

“These four RS-25 engines produce a total of two million pounds of thrust, allowing the SLS to reach MACH 23 (faster than 17,000 mph) at an altitude of more than 100 feet in just over eight minutes,” Cagnola said. “The 2.3 million-lb. SLS core stage is the largest rocket stage NASA has ever built.”

Before sending the Orion capsule to the moon, NASA is conducting a green run test, which is an integrated test of the whole rocket stage to verify that it is ready for flight.

“When we completed the core stage production at NASA’s Michoud Assembly Facility, I was assigned to NASA’s Stennis Space Center in Mississippi to continue working with NASA contractors for the green run testing,” Cagnola said. “A green run is a series of tests that thoroughly check out the entire core stage and that culminates with a full-up [hot fire test] of all four of the stage’s RS-25 engines at the same time to simulate a launch.”

The first green run hot fire test for the Artemis moon rocket that took place on Jan. 16 at Stennis was heavily promoted by South Mississippi and South Louisiana media as an event not to miss. The firing of all four of the stage’s engines were predicted to be louder than any other test run at Stennis. Hundreds of people flocked to the Mississippi Welcome Center with cameras in hand to capture the giant rumbling while residents in Diamondhead, Miss., said objects in their homes started rattling.

“When you start it, you slowly have to turn on the avionic boxes, then charge the batteries,” Cagnola said. “You’re methodically turning it on and doing verifications of each system as you go until you have one large core stage with all the systems working simultaneously. Both fuels are very, very cold and have to be cold to stay in liquid form and not their natural gas state. We’re looking at temperatures of lower than -400 degrees for one of those propellants. Then when it’s time for ignition, we get up to a few thousand degrees in just less than a second.” 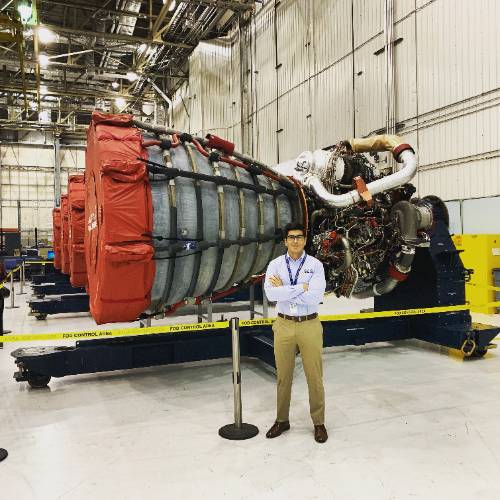 The test concluded with NASA running all four RS-25 engines for 67 seconds. Cagnola led the test commentary as the broadcast subject matter expert and was in charge of communicating with the green run test conductor and team members in the control room to relay information. NASA has analyzed the 800 terabytes of data from the green run test and will use it when launching Artemis I.

The Artemis team is set to conduct a second green run test in February for a longer duration. The core stage will then be transported through the Gulf of Mexico on NASA’s Pegasus barge to Kennedy Space Center, where it will launch later this year. Cagnola hopes to be a part of launch operations as well.

“It’s an absolutely surreal experience for everyone who’s been working on this for the last few years, and longer than that for some,” he said. “Everyone is really excited to see it launch for Artemis I and for future Artemis missions.”

For Cagnola, becoming a NASA engineer was a dream, though getting to college was more than his family could have hoped for.

“Coming from Lafayette, just getting to college was a great accomplishment for me since I’m the first one in my family to earn a college degree,” he said. “My whole goal was to get to college, then after that, I thought, what next?”

After graduating from LSU, Cagnola attended graduate school at the University of New South Wales in Sydney, Australia, where he received his master’s in energy resource engineering in 2017. He then moved to Austin, Texas, to work for mechanical contractor Brandt, where he did mechanical process design. With some experience under his belt, Cagnola decided to go for it and apply to his dream job at NASA.

“It became important that I work on something I’m passionate about, something I could give my all to,” he said. “NASA offered me a job and gave me two and a half weeks to report to work. It was very exciting.”

In 2018, Cagnola moved to Huntsville, Ala., to work at NASA’s Marshall Space Flight Center as a propulsion engineer, designing and testing engine hardware. After seven months, he was put on a rotational assignment at Michoud and was involved with core stage production and assembly and all testing for the SLS Core Stage. Cagnola is now a permanent Michoud employee, helping astronauts live their dreams.

“I think it’s important for those of us in NASA to continue to dream big and really push the boundaries of our space program, not only for us, but for future generations,” he said. “I get a lot of satisfaction knowing there are young adults who watch our tests and launches and can be inspired to have a career in space. I’m still amazed by space every time I see a test run or watch a video. I’m mesmerized by it. I don’t think it will ever get old.”