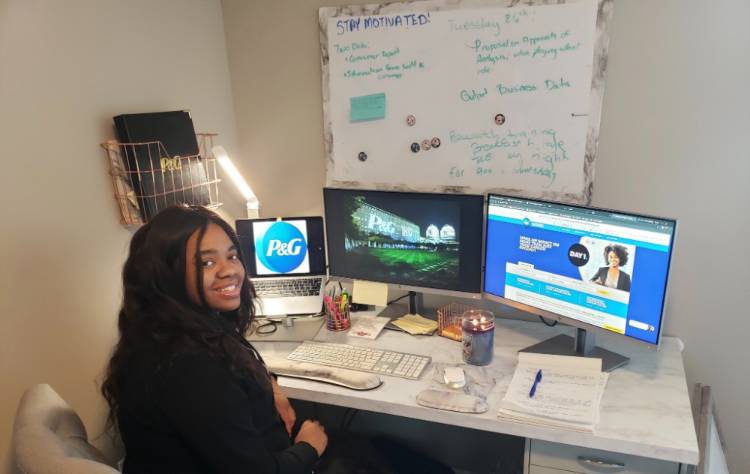 BATON ROUGE, LA – This summer, LSU Computer Science junior Drika Winfrey had a close-up look at how COVID-19 affected the supply chain while working for Procter & Gamble, one of America’s largest suppliers of everything from detergent and diapers to toothpaste and shampoo.

More importantly, the Baton Rouge-native’s internship is an example of tenacity and going after a position you want.

Last fall, Winfrey attended a career fair in Patrick F. Taylor Hall and approached the P&G booth, hoping to apply for an internship in data and analytics, her concentration in CS at LSU. The representative said there were currently no positions in that field, but she would send Winfrey’s resume to P&G headquarters in Cincinnati. The next day, she received an email from the company.

“P&G emailed me a link to an online test that was really difficult,” Winfrey said. “Two days later, they asked me to do a phone interview. I was having surgery, so I scheduled it for the day after and did my interview right there in the hospital bed. I then received an email from P&G offering to fly me to Cincinnati. So, they flew me there, where I did a case study and panel interview, which I finished on Friday. On Monday, they told me I had the job.”

A day after finishing her last final exam in May, Winfrey began her 12-week internship with P&G as a supply network operations intern, also called an SNO intern. She received her project assignment on her first day of work, working virtually from her home in Baton Rouge.

“There are a ton of different roles in SNO, but my role was to work with Distribution Requirements Planning (DRP) and SPS Analytics (Supply Planning Synchronization Analytics), so I was able to work with the Analytics team,” Winfrey said. “I had the chance to work with two teams because DRP was my original one, and P&G also had us pair up with another intern, which it had never done before. So, I had two joint projects and two individual projects.”

Winfrey and her two partners created a model to analyze the supply chain during COVID-19. Their project was well received and even earned accolades from P&G in China.

“P&G believes in responsibility from day one, so you’re not getting just any project,” she said. “It’s an actual project they can use after you leave. We received high praise for it. It was awesome. I loved working with this team.”

Winfrey has already been offered another summer internship in 2021, with the promise of a full-time job afterward. Winfrey hopes to join P&G’s Amazon team in Seattle, but if not, she will make the move to Cincinnati, an opportunity she missed this summer due to the pandemic.

“I’m so excited to travel up north since I’ve spent my whole life here in Baton Rouge,” she said.

Winfrey, who is a member of LSU’s Society of Women Engineers and National Society of Black Engineers, wants to let students know that they aren’t limited to just what they see.

“Truly express your interest because you never know what’s going to happen,” she said. “P&G wasn’t advertising for the internship I got. What I ended up doing for them was phenomenal. I loved it. My time at P&G was valuable to me. I never thought as a first-generation college student that I would ever have the chance to work for a company that values me and wants to help me make a legacy for my family.”