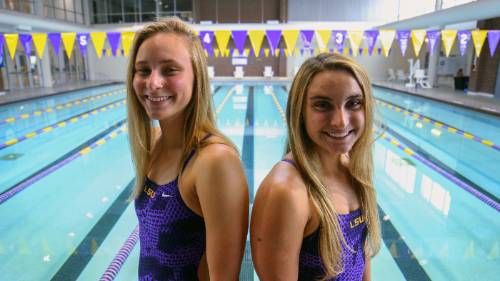 BATON ROUGE, LA – It’s bad enough to miss walking the stage at graduation or having to enter the workforce during a pandemic, but it’s been an even tougher time for three LSU Engineering students who had their Olympic dreams dashed due to COVID-19.

LSU swimmers and chemical engineering students Nicole Rozier and Helen Grossman qualified for the Olympic Trials that were set to start tomorrow, June 19, in Omaha. The two girls spent most of their lives swimming competitively and began training even harder with LSU to make it to the trials. They practiced six days a week, sometimes twice a day, and spent at least three hours in the gym weekly. When Rozier heard that the International Olympic Committee postponed the Olympics to July 2021, she felt down but not defeated.

“It’s frustrating to have the Olympic Trials postponed, but I understand looking at it from the committee’s perspective,” she said. “It’s really not a level playing field anymore. Anyone could have a backyard pool they’ve been training in, or have some sort of access to a pool while others like me have no access whatsoever.”

The biggest issue for Rozier, who graduated in May, is trying to train for another year while possibly working her first full-time job.

“I would love to be able to work swim-time into a job,” she said. “If I’m still in Baton Rouge, I’m sure the LSU Swim Team would let me train with them a little bit. They’re really accommodating and understand what it’s like to fulfill a dream. They’ve helped me get this far.”

Until recently, Rozier wasn’t sure she would be able to start her internship with Solenis, a water solutions/treatment facility in Garyville, La. In April, the company told her wasn’t sure it could offer her the position at that point due to the COVID-19 outbreak. Fortunately, Rozier will start her internship with Solenis next week and hopes it will turn into a full-time job in the fall.

“I hope to prove myself as a valuable employee while also gaining hands-on experience,” she said. “My goal is to work hard and turn this opportunity with Solenis into a career.”

Once Grossman, a junior, heard about the Olympics being moved to next year, she made the hard decision to retire from swimming.

“After the announcement that the trials were being postponed, I decided it was time for my retirement from the sport,” she said. “I am starting a co-op with a Marathon Petroleum refinery in El Paso in the fall, and it would not be feasible for me to train another year.”

Like Rozier, she understands the committee’s decision to postpone the trials.

“I think it was a great idea for the trials to be moved to 2021 because it will be the best for the health and safety of all the athletes,” she said. “This is a much better option than canceling because these athletes have worked their entire lives to attend the meet and greet and get their chance at making the Olympic team.”

Grossman, who is set to graduate in spring 2021, is sad about leaving the sport she has flourished in but will cherish her memories with the LSU Swimming & Diving team.

“I am so grateful for the opportunity given to me by LSU to train for four years, and I’m extremely sad that it had to end early and not on my own terms,” she said. “I am very excited to follow my younger teammates through their journey toward Olympic Trials 2021, and I can’t wait to see what they do in the NCAA as well.” 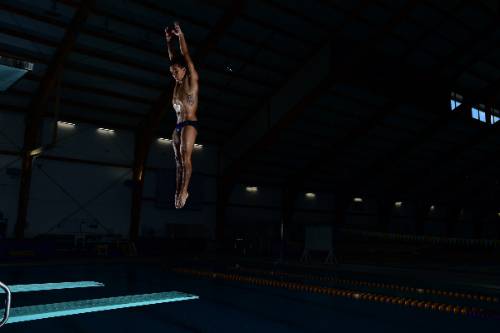 In early March, LSU diver and civil engineering senior Juan Celaya-Hernandez qualified for a pre-Olympic event that was set to take place in Tokyo in April 2020. Hernandez was to compete for his home country of Mexico.

“I was really disappointed for five days after we got the notice about the Olympic games being postponed, but now I’m just trying to enjoy some forced vacation time with my family in Monterrey [Mexico],” Hernandez said. “I have no idea whether I will have to win my spot again, or if the team is already set in stone. I have lots of questions, but hopefully this will be another chance for me to better my score at the event and be better than before.”

“The thing about our sport is it’s such a delayed gratification,” Rozier said. “You work for six to eight months or a year, and you’re just waiting for that final meet to showcase everything you’ve been training for. It’s just rough. I could sit and be sad about it all day, but that’s not really being productive. I’m glad I already qualified. No matter what, they can’t take that away from me.”

Wherever these three LSU Engineering students end up, they are sure to make a splash, or in Hernandez’s case, try not to.