To the Pointe: LSU ME Junior Pursues Passion for Dance 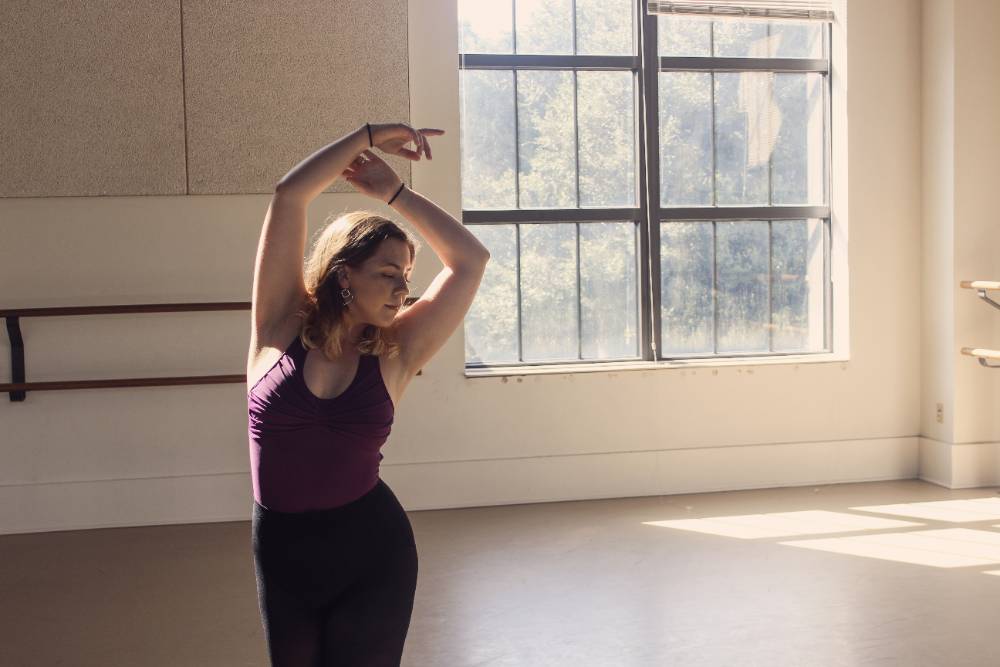 BATON ROUGE, LA – Every Monday, Sophia Greenwood gets to live out her dream. She walks into the naturally lit studio in LSU’s Music & Dramatic Arts building, removes her shoes, stretches and closes her eyes. It’s during this one hour, one day a week that she feels confident and most like herself. Though the LSU Mechanical Engineering junior is completely devoted to her major, she is able to balance her studies with her passion for dancing as part of the LSU Dance Ambassadors.

“I started dancing at the age of 7 or 8,” Greenwood, a Houston native, said. “It’s always been a stress reliever and an interesting medium to express how I feel. You don’t need any words.”

Greenwood’s love for dance was a natural occurrence, though one might argue it’s in her blood. Greenwood’s great-aunt is a dancer and choreographer who started her own jazz company in Paris in 2011. Her younger brother was a ballet dancer with the Orlando Ballet Second Company until he left to pursue an environmental science and research degree at LSU.

“He started dancing later in life at the age of 13 and eventually began to take ballet classes with me,” Greenwood said.

The first dance class Greenwood ever took was hip hop, soon followed by ballet, jazz and tap. She immediately fell in love with ballet and Gillian Murphy’s performance in Swan Lake and wanted to focus solely on that genre until making a new discovery.

“For a big chunk of my life, I really wanted to be a ballet dancer,” Greenwood said, “but I decided my junior year of high school that I wanted to branch out more and do contemporary dance.”

During high school, Greenwood took master classes from contemporary dancer Sean Aaron Carmon, who danced with the Alvin Ailey American Dance Theater. She also joined a youth performance group in downtown Houston called the METtoo Youth Company, a second company for the nonprofit organization METdance, formerly known as the Houston Metropolitan Dance Center, whose mission is to instill passion and excitement for dance into its students. It’s here that Greenwood honed her talent before minoring in dance at LSU.

As many young dancers do, Greenwood dreamed of attending a dance college before she realized how costly they are and that there was another world out there for her to explore.

“Point Park University in downtown Pittsburgh was my first choice, since I attended their summer dance intensive for six weeks,” Greenwood said. “I got to meet people from all over the world and work with choreographers. I really wanted to pursue that in college but it was a private institution and quite expensive. Then I realized I don’t have to get a degree in dance in order to dance. My whole life was just all dance and I never really got to experience other things like organizations and clubs. I needed to be involved in other things.”

Greenwood chose to attend LSU and major in ME because she has “quite a strength in math and physics” and her stepdad has an ME degree from the university, she said.

“I fell in love while touring the campus,” she said. “LSU has a very strong engineering college and the student resources are fantastic. It’s one of the best decisions I have made in my life. I love it here.”

Not only does Greenwood stay busy with her engineering studies, but she is also the secretary for LSU’s Society of Women Engineers; a member of Bengal Brigade, where she attends all sporting events to do promotions and giveaways; and she works for the LSU School of Music programs division, designing, formatting, and printing all of the recital programs.

Greenwood’s latest venture, however, is perhaps the most exciting. She now teaches classes as an LSU Dance Ambassador on Monday evenings in the very studio she practices in.

“I recently taught my very first class,” she said. “I choreographed a combination. We have a different person teaching each week, and we give the opportunity for students to teach class. We teach combos and some technique classes, but we’re trying to do a different style for each class. One Monday will be jazz or hip hop, and the following Monday will be tap or contemporary. It’s open to everyone. All levels are welcome.”

As for Greenwood’s plans after graduating from LSU, she hopes to have the freedom to do engineering and dancing.

“I would like to see if I could find a delicate balance between engineering and dancing when I graduate,” she said. “Maybe I could have an engineering job during the day and teach classes at night, or if there’s an engineering company that’s flexible, where I could also dance with a dance company. That would be great if I could somehow incorporate those.”

Until that day comes, Greenwood can be found going to class in Patrick F. Taylor Hall or dancing in the studio, no longer dreaming of what kind of dance career she would have had and instead looking to the future and showing students it is possible to chase two dreams at once.