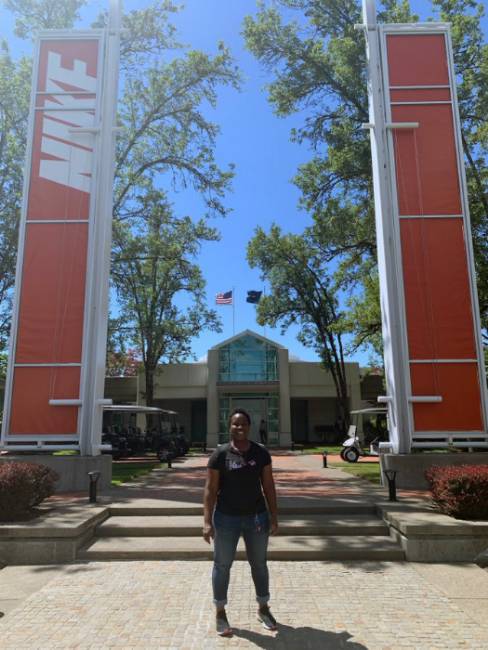 BATON ROUGE, LA – Before starting college, Myla Moore knew exactly what she wanted to do and made it happen.

“I chose LSU because I was born in Baton Rouge and have roots here,” Moore said. “I lived in Austin and loved it (she really misses the tacos), but it felt right coming back here.”

Moore, a senior majoring in CS and math, hit the ground running after her first year at LSU and hasn’t slowed down since. The summer after her freshman year, Moore accepted an internship at Chevron headquarters in San Ramon, Calif., where she served as an IT business analyst, collaborating with a team on a three-month-long project in Chevron’s technology department.

Later that fall, Moore served as an IT analyst intern at Albemarle Corporation in Baton Rouge, where she helped build business diagrams for a software upgrade. The next summer, she traveled to Chicago and worked as an IT developer intern at the Bank of Montreal headquarters, where she designed and implemented an internal website.

In the fall of her junior year, Moore accepted an internship at IBM’s Client Innovation Center in Baton Rouge, where she was an application development specialist intern writing code for businesses.

Then came the call from Nike.

“I’m a Jackie Robinson Foundation scholar, which is an awesome scholarship program I’ve been in since my freshman year,” Moore said. “Nike reached out to the foundation and said they wanted to hire a couple of scholars, so I had to apply and go through the interview process, and I was fortunate enough to land the internship.”

Moore spent this past summer as a software engineering intern, writing code for one of Nike’s consumer applications at its world headquarters in Beaverton, Ore., right outside of Portland.

“Basically, when the business needed enhancements, they tasked me with helping make their system better,” she said. “It’s super awesome that they’re using my code.”

Another perk about working for the world’s No. 1 shoe brand was the free kicks.

“I got so much free stuff,” she laughed. “On our first day, Nike gave us a free pair of shoes, and we got a pretty hefty discount on Nike products. I did a lot of shopping.”

Beyond working for Nike, Moore enjoyed her stay in Portland, Oregon’s largest city nestled in the shadow of Mount Hood.

“Portland is beautiful,” she said. “One weekend you can go to the coast, and another weekend you can go for a hike in one of the many forests or go wine tasting in the country. I made a lot of intern friends. It was fun to explore the city with people my age.”

Though Moore enjoyed working for Nike and is thankful for all of her internships while at LSU, she has her sights set on what is considered the mecca for any CS graduate—Silicon Valley.

“I want to work for a tech company after graduating,” she said. “Maybe Google, but we’ll see. I’m starting the application process, so hopefully I’ll be able to work in big tech and build applications.”

Moore, who is president of LSU Women in Computer Science, is also considering earning her Master of Science in Analytics (MSA), a degree offered by LSU’s Stephenson Department of Entrepreneurship & Information Systems (SDEIS) in the E. J. Ourso College of Business. The program is designed to prepare students to use data-driven methods to contribute to organizational effectiveness and guide decisions.

“By the end of it, I’ll have interned with a company and actually have done analytics work for them,” Moore said. “I’ll have my master’s in one year, which is something I’ve always wanted.”

As for what advice Moore would give future LSU CS students, or anyone applying for an internship, she says to communicate with those who have already gone through it.

“Really reach out to people who are older than you in your field; so whether that means they’re full-time or seniors, listen to their story to hear what they wish they would have done,” she said. “When I started off my freshman year, I talked to a lot of seniors and people at my internships, and all of them gave me awesome advice, classes to take, or things they wish they hadn’t done. That was helpful. It’s definitely good to start applying for internships as early as possible and research positions. People love to hire young people, and you can figure out if you actually want to do this and pursue the field you’re in.”