Barking Up a New Tree 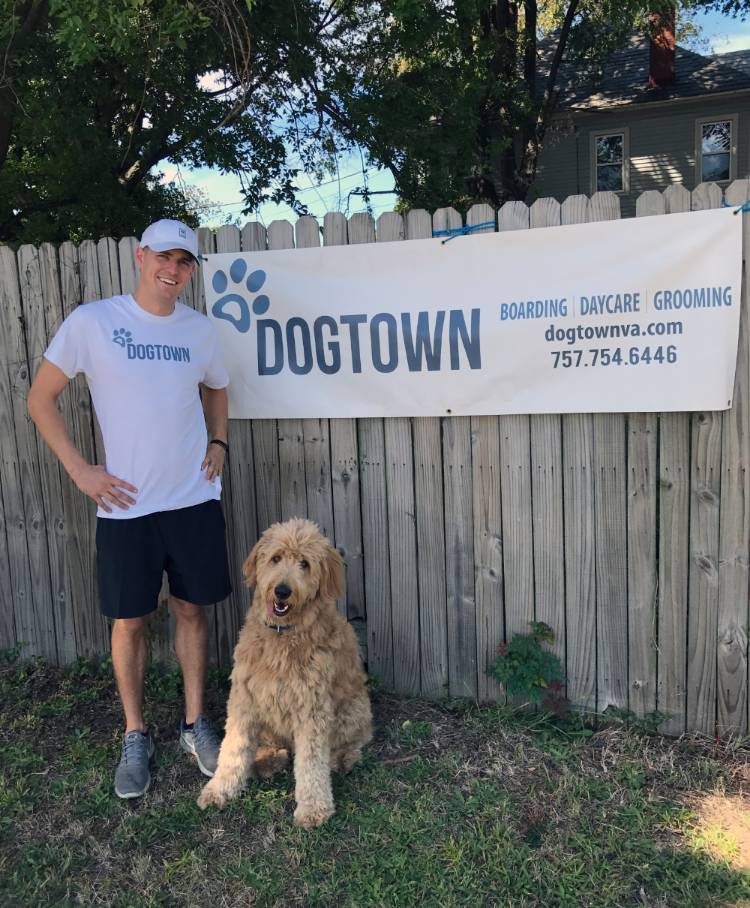 BATON ROUGE, LA – Every morning at 5:30 a.m., Sam Woomer wakes up to the sound of dogs barking just outside of his house. In any normal circumstance, this would be considered a nuisance. For Woomer, however, it’s the sound of success.

For the past two years, Woomer has run Dogtown, a dog daycare and boarding facility in Norfolk, Va., that caters to dog owners who must be at work by 6 a.m. or work until 8 p.m. The days are long but it’s worth it for the LSU Petroleum Engineering alumnus who never imagined being in this line of work.

Born in Lexington, Ky., Woomer first attended the University of Colorado in Boulder, where he says he enjoyed the slopes a bit more than the classroom. After figuring out that he wanted to major in engineering like his dad, Woomer transferred to LSU his junior year and began studying petroleum engineering.

“Petroleum engineering was a hot major at the time, and my dad was involved in the coal mines in West Virginia, so it was a good route to take,” Woomer said.

Thanks to LSU Career Services, Woomer was able to gain more experience in his field by interning at Baker Hughes in Broussard, La., and Allied in Odessa, Texas. After graduating with his PETE degree from LSU in 2016, Woomer accepted a position as a nuclear test engineer for the Department of Defense in Norfolk. He spent the next 18 months working on aircraft carriers, conducting reactor safety and maintenance and starting each day at 5:30 a.m.

Woomer didn’t see room for advancement, however, and began working side jobs six months before leaving his position with the DoD.

“I started walking dogs, dog sitting, power washing, snow removal, selling furniture on digital apps, basically anything, and I ended up making more money with these side jobs than I did with the government,” he said.

In choosing one of these jobs to focus on, Woomer thought back to when he worked for the DoD.

“When I worked at the shipyard, I couldn’t find a place to take my dog before work,” he said. “No one opened early enough to catch Navy personnel, and my shift started at 6 a.m. I thought, I can’t be the only one that can’t get my dog into day care because of my hours.”

“I’m not reinventing anything,” Woomer said. “I’m just thinking about who my customers are and how I can help them.”

Dogtown is 5,000 square feet of indoor space that can house up to 75 dogs comfortably, with 32 boarding kennels that are full all week and on weekends. There is also a 5,000-square-foot grassy outdoor play area where the dogs can run amuck. Though Woomer has 20 employees, he is the one who takes the dogs out each night to take care of business before mom and dad pick them up or when it’s time for them to go to bed in their snug kennel.

Dogtown is thriving now, Woomer said, but it wasn’t always that way.

“The first three months Dogtown was open, I lived on a twin bed in the kennel room and rented out my apartment on Airbnb nearly 20 nights out of the month,” Woomer said. “I would pop in my place for a quick shower while no one was there.”

Today, Woomer no longer lies with the dogs. He has a three-bedroom house attached to the Dogtown play yard, so he’s never far from his furry friends.

As Dogtown proved to be a success, Woomer decided to open a 24/7 indoor dog park called Dogperk.

“Dogperk was my original idea but the numbers didn’t make sense at the time,” Woomer said. “I figured I would need about 330 dogs and owners to sign up each month and that number sounded like a lot. Day care needed less dogs. Dogtown was a good indicator of interest for Dogperk. It’s an awesome space.”

Dogperk is just one block away from Dogtown and is 3,500 square feet of turf housing a washing/grooming station, work/laptop stations for dog owners, a training area, a ping pong table, and a coffee station, with adult beverages coming soon.

Dogperk is only $30 a month, with members receiving a key fob to visit any time of day.

“I’m working on different ways to get people in there to see it,” Woomer said. “A dog wash is between $12-$14 at a grooming place, but here, you get unlimited washes. It’s a good deal.”

One thing Woomer no longer needs to worry about is where to bring his dogs while he’s at work.

“I bring my gang with me to Dogtown every day,” he said.

“You’ll see Moose in a lot of my videos,” Woomer said.

An Instagram video recently showed Woomer taking some Dogtown pups on a field trip to Home Depot, where they were given special store aprons to wear and titles for the trip [Arya worked in the tool section, while Moose worked in paint].

“People always ask what I studied in college, and I say, ‘You’ll never guess,’” Woomer said. “This is fun and a change of pace.”