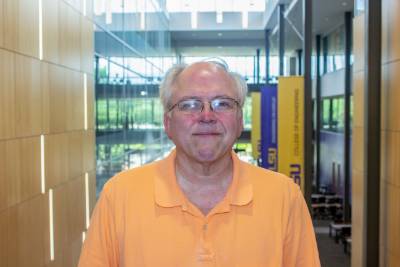 BATON ROUGE, LA – For the past 35 years, LSU Cain Department of Chemical Engineering and BASF Professor  Kerry Dooley has offered his students an array of knowledge, as well as sound advice on how to earn an engineering degree and make it in the working world.

Just don’t ask him when he plans to retire.

Born and raised in the Carrollton area of New Orleans, Dooley attended Jesuit High School, where he enjoyed math and chemistry classes. Though he initially pondered going to law school like many of his peers, Dooley thought he would give engineering a shot.

“My senior year, I asked my calculus and physics teacher if I could make it as an engineer, and he laughed and said, ‘Of course you can make it,’” Dooley said. “No one was really going into engineering back then. Everyone wanted to be a lawyer or doctor.”

Dooley enrolled in engineering at Tulane University and recalls talking to a few seniors who told him he was making a big mistake.

“They said there are no engineering jobs and that it was a dead-end profession,” Dooley said. “This was right when the energy crisis was hitting. That’s what the conventional thinking was when I went into engineering, but when I came out, it was hot. Everyone in my class was fighting off offers.”

After receiving his bachelor’s in chemical engineering from Tulane in 1976, Dooley worked at DuPont in LaPlace, La., for a couple of years as the “typical grunt process engineer,” dealing with neoprene polymers, which he points out is what the soles of shoes are made of.

He then earned his coursework master’s from Tulane in 1978 before leaving for the University of Delaware, where he spent the next four years conducting polymer research and working toward his PhD.

“In those days, DuPont and Delaware were almost synonymous,” Dooley said. “DuPont had several people in research who worked at the Experimental Station [in Wilmington, Del.].”

Dooley had planned to find a job up north after earning his PhD in 1983 but fate would intervene.

“We were in a recession at the time and it hadn’t yet hit the south or west,” Dooley said. “So, that’s where I interviewed, and LSU was aggressively recruiting.”

It wasn’t just the allure of being closer to his family that brought Dooley to Baton Rouge; LSU College of Engineering Dean Ed McLaughlin sold him on LSU.

“Ed was a good salesman,” Dooley said. “All the other places I interviewed, there was something that didn’t seem right.”

Dooley started off teaching reactor design at LSU and has since gone on to teach “most of the stuff” in the ChemE undergraduate and graduate curriculum, including junior and senior lab, fluid mechanics, and unit operations (now Design 1).

Over the years, he has tried to help students understand that engineering, particularly chemical, is not easy and that’s normal.

“The students think their problems are unique,” Dooley said. “Unfortunately, many have the tendency to give up. You can’t give up. Students think that professors didn’t have to struggle when we were students; that it was all easy for us. Nothing is further from the truth. All of engineering is a struggle. I can remember my organic chemistry class and getting a 38 on a test, a real F. I was crushed. I thought, I’m never going to get out of here with a degree.”

Dooley is a firm believer in practice makes perfect, or nearly perfect.

“It doesn’t sound appealing to the students to work problems and read the book, but that’s how everyone learns in engineering,” he said. “I like to use a football analogy. If you refuse to scrimmage, run laps, or hit the tackling dummies, you’re going to be flattened when game-time rolls around. A lot of students want to watch the coach’s film but this doesn’t get you ready for the game. Engineering is very experiential. You have to practice it.”

The most important advice Dooley gives his incoming students is to hit the ground running, don’t lose your scholarships, don’t wait until the end of the semester to get help, and make sure you actually like engineering.

“The faculty will try to help you,” he said. “I don’t know of any ChemE faculty member who would not help a student with a problem. They’re not going to give you a miracle answer most of the time, but they will help get you started. Also, you’re going to be in engineering for the rest of your professional life, so you better like it. How can you find out if you really like engineering? I think the course that tells you the most is the first physics class.”

Dooley admits he never thought he would be at LSU this long. If it weren’t for Hurricane Katrina in 2005, he may not still be here.

“I was about to leave Louisiana, but my mom lost her house in Lakeview—17 feet of water to the attic,” he said. “So, I brought her to Baton Rouge to live with me. It wouldn’t have been right to move her out of the state.”

Thanks to Mother Nature’s intervention, Dooley has remained at LSU, where he continues to teach students and work alongside ChemE assistant professors like James Dorman, who is working with Dooley on an NSF project.

“The assistant professors we have are top-notch,” Dooley said. “They really don’t get enough credit.”

As for when he plans to retire, Dooley laughs and says, “I was going to retire in May if I didn’t bring in any more money, but I brought in more money. When I do retire, I’m going to do what my dad did, which is do all the stuff I didn’t get to do while working. I’ll keep busy somehow. I may even still teach.”

Dooley’s reluctance to leave the job he has been so passionate about for the past three decades is LSU’s gain.