Engineer by Day, Comedienne by Night 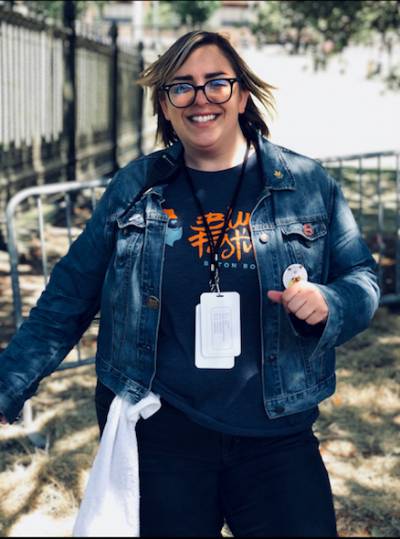 Where are you originally from?

I was born and raised in Jeanerette, La. It’s a small town on Bayou Teche, about 40 minutes south of Lafayette.

What high school did you attend?

What year did you graduate from LSU?

My high school physics teacher made the class break out into groups and then compete to see who could build the strongest manila folder (and glue) truss. I’ve been hooked on free-body diagrams ever since.

Do you remember a favorite class or professor you had while at LSU?

I vaguely remember getting an unnatural amount of satisfaction out of my Indeterminate Structures class. I think I just felt fancy because I understood the concept quickly, and who doesn’t love Surveying—the class that gets you outdoors! (**only fun in good weather**)

Where do you work now and what do you do?

I’m currently a civil engineer with the LA Department of Transportation and Development (DOTD) in the Bridge Design section. I’ve been designing bridges for my entire career, except for a brief quarter-life crisis where I chased after the oilfield industry bankroll, only to find myself longing for a bridge gig again. Money doesn’t buy happiness, folks.

What do you like about your job and how does it pertain to your degree?

I get to do what I love. I’ve always been technically inclined (I took EVERY math class my high school offered), and being able to design bridges for the great state of Louisiana is an honor. I am one of the lucky ones who ended up with a degree that is unequivocally relevant to my day-in/day-out job.

How did you get into comedy?

By accident. Long story short, I still have my diary from 1997. I was 13 and boy-crazy. This diary ended up being read aloud at a party one night and it was a huge hit. Someone approached me after the party and asked if I would be interested in braving a stage. It took me a few months, but the right opportunity came around and I jumped all-in.

How long have you been doing stand-up comedy?

I first took the stage for a charity show back in June of 2018.

What was your first gig like? Where was it? Were you nervous? How did you overcome stage fright?

For my very first gig, I wasn’t solo. My good friend, Gus, and I decided to give my diary a read on stage akin to how the Netflix series “Mortified” went down. Our spin on the concept was that Gus was going to be the voice of that 13-year-old girl, and I was giving all the juicy details and backstory. The show was held at the Arts Council in downtown Baton Rouge for charity. I was nervous! But, to be honest, I’m always the loud, funny girl (one of them at least) around my friends, so I tried to pretend I was up there just hanging out and telling my story.

What do you enjoy most about stand-up?

I have so much respect for good storytellers. My father is a fantastic storyteller. I’ve always been in awe of people who command attention. Engaging an audience is tough, but my gosh, is it rewarding. When people listen and connect with your stories, it’s a moment of genuine connection, and I live for that.

The stress. It usually starts to feel daunting a few days before the show and my mind, against my will, gives the looming performance way too much attention.

How long does it take you to come up with content for a show?

What’s the topic you most enjoy talking about?

All aspects of my life. I’ve worked hard to break free of the proverbial “best laid plan”—job, marriage, kids, suburbs, debt, etc., and with that has come an unpredictable and wonderful world full of amazing people, unique adventures, and hilarious tales.

Who is your favorite famous comedian/comedienne?

This will date me but Chris Farley was basically the funniest person in the world to me growing up. He did the silly physical comedy, as well as the jokes. I used to make little skit videos with my friends when we were little. I wanted to be on Saturday Night Live so bad!

I have now performed stand-up twice for charity—once at the Arts Council and once at Soji: Modern Asian. I’ve also gone through the Leather Apron Theatre Company’s improv comedy class here in Baton Rouge, which culminated in a 20-minute-long improv set with my classmates (also at the Arts Council). I don’t have anything on the books coming up just yet, but with the right amount of harassment, I may be swayed into popping onto the NO SHOW Comedy open mic stage at City Bar every Wednesday at 8 p.m.