Are We Sinking? NGA Visits LSU Campus to Measure Subsidence 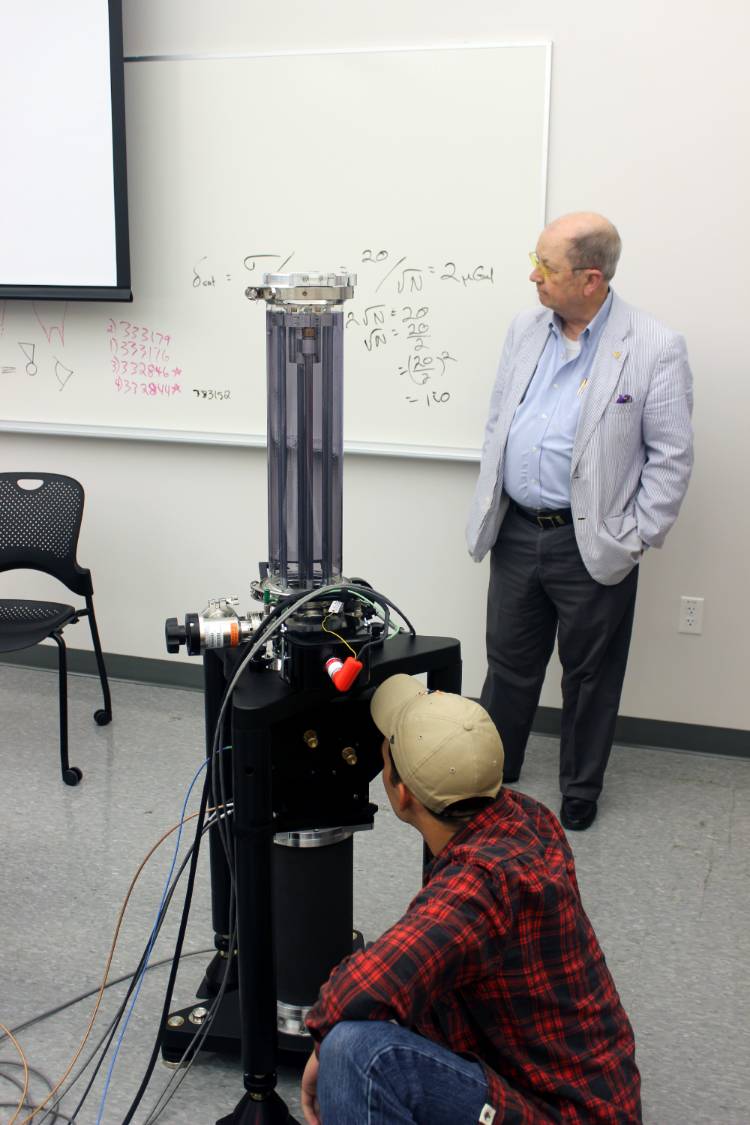 BATON ROUGE, LA – Throughout the month of October, 10 members of the National Geospatial-Intelligence Agency visited LSU’s campus and other statewide GPS sites to take gravity measurements for a research project spearheaded by LSU Center for Geoinformatics (C4G) Chief of Geodesy Cliff Mugnier.

Every five to 10 years, the NGA takes measurements of the earth’s gravity field to check for subsidence, a project Mugnier has been working on for nearly 30 years.

“LSU has the largest university-owned network of permanent GPS stations in the world, which reach from Louisiana throughout the Gulf Coast,” Mugnier said. “Over the years, I have asked the military to come in to take measurements at these stations. I first go to the New Orleans Corps of Engineers, whose colonel then writes a letter to the Pentagon asking if they can come to Louisiana and observe different places where we have our GPS antennas for our research on subsidence. The idea is if you come back to the same spot over a period of years and see an increase in the strength of the earth’s gravity, that means you’re getting closer to the center of the earth, which equates to subsiding.”

The NGA kicked off its recent Louisiana trip at LSU’s Absolute Gravity Station using instrumentation similar to the FG5-X Absolute Gravity meter that C4G purchased this year. C4G also houses two CG5 Relative Gravity meters. From LSU, the NGA team—consisting of two groups of five trainees from New Mexico, Whiteman Air Force Base in Missouri, and both the East and West Coasts—moved on to other GPS core sites across south Louisiana that included Oakdale, Alexandria, New Orleans, Slidell, Boothville, Lafayette, Lake Charles, Cocodrie, and Grand Isle. The NGA will take measurements in north Louisiana this winter to conclude their 2018 Louisiana campaign.

“The reason for these gravity measurements is to have a completely independent physical measurement of vertical movement as a function of gravity, rather than readings from the GPS satellites,” Mugnier said. “It all fits together for the subsidence research, but another reason is when people mortgage their homes, the banks require them to have flood insurance, which is based on elevation. The Corps [of Engineers] is also interested in subsidence because they have the responsibility of levees and flood control.”

The NGA hasn’t visited Louisiana since 2003, shortly after Mugnier arrived at LSU. Though subsidence is of vast importance to Louisianans, the NGA does not take measurements every year because subsidence is a slow process.

“If you do it too frequently, the observations get lost in what is called white noise,” Mugnier said. “Even though the instruments are super precise, you still have to have the time for the sinking to be enough for the instruments to detect.”

Mugnier’s research on Louisiana subsidence began when he taught at the University of New Orleans, where the first NGA measurements were taken in 1989. Since then, research has shown that UNO’s campus is sinking at a rate of 9.1 mm/year, which Mugnier said is significant when you consider that equates to 3 feet in 100 years.

“Three feet is a whole lot when you also consider sea level is rising about 2 mm each year,” he said.

Since the first reading taken at LSU around 2003 by the National Geodetic Survey, it has been discovered that LSU’s campus is subsiding around 5 mm/year near the fault line on Nicholson Drive. The campus is on the downside of the fault.

Since subsidence is an unstoppable force, Mugnier has made sure that C4G will continue his research when he is no longer at LSU. The man who started C4G, LSU Professor Roy Dokka, established the organization whose mission is in keeping with state law that says C4G is the source to keep track of elevations for the state of Louisiana.

“So, we have an organization that’s going to be here long after I’m gone,” Mugnier said. “And we have the perfect research project that will go on forever.”