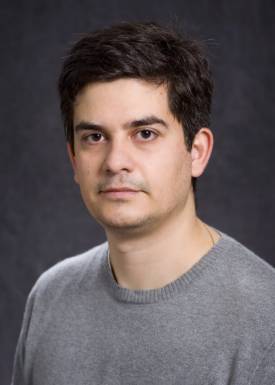 Born and raised in Greece, Veronis received his bachelor’s degree in electrical & computer engineering with honors from the National Technical University of Athens in 1997. He then earned both his master’s and PhD in electrical engineering from Stanford University in 1999 and 2002, respectively.

“I became interested in engineering and computers in the 1980s, when I was first introduced to the basics of computer programming in middle school,” Veronis said.

Prior to joining LSU’s College of Engineering faculty in 2008, Veronis was an engineering research associate at the Ginzton Laboratory at Stanford University.

His research group at LSU theoretically and computationally explores the development of nanoscale photonic devices. The group undertakes large-scale simulations, using LSU’s high-performance computing resources, to explore new nanophotonic structures and devices for manipulating light and enhancing light-matter interactions at the nanoscale. In doing so, it seeks to identify the most promising structures for specific device applications, such as sensing, switching, and photovoltaics. As part of his research, Veronis collaborates extensively with researchers from the College of Engineering and the LSU Department of Physics & Astronomy, as well as with external collaborators.

In 2013, Veronis received a CAREER award from the National Science Foundation to develop physics-based modeling techniques to enable high-performance nanoplasmonic devices for optical information processing. He is also a senior member of the Optical Society of America and has served several times as a member of the technical program committee of conferences organized by the Optical Society of America, the Institute of Electrical and Electronics Engineers, and the International Society for Optics and Photonics.

Veronis currently holds the Rubicon Professorship of Engineering at LSU.

In his spare time, he enjoys outdoor activities, traveling, and spending time with his wife and two kids. Along with his research and teaching, Veronis loves LSU’s beautiful campus and often attends performances at the LSU Union Theater.