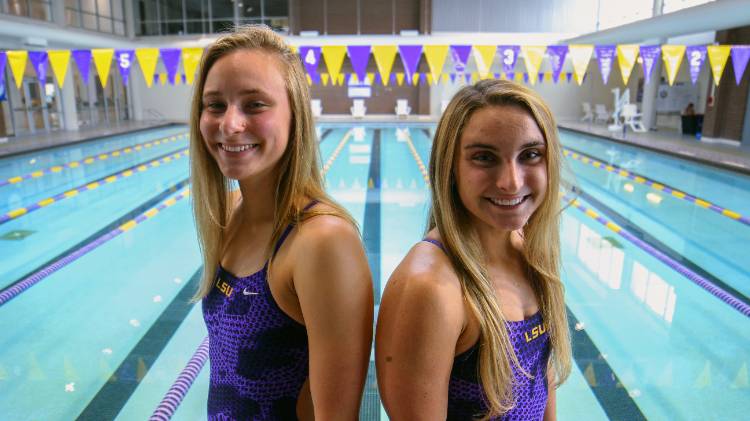 BATON ROUGE, LA – Studying engineering can be a challenge, but LSU Chemical Engineering seniors Nicole Rozier and Helen Grossman are working to conquer an even greater one. The pair, who are on the LSU Swimming & Diving Team, recently qualified to compete in the Olympic trials next summer, proving that discipline and hard work can earn you a degree and a chance to compete in the Olympic Games.

Rozier and Grossman began swimming competitively at the ages of 6 and 7, respectively, though they actually learned to swim much earlier. Rozier, of Coeur d’Alene, Idaho, began taking swimming lessons when she was just 2 and swam competitively throughout high school. When it came time to choose a college, she toured five campuses to find the right fit.

“In swimming, you get five official visits to colleges your senior year. So, I visited LSU, Ohio State, Boise State, University of Utah and Northern Arizona University,” Rozier said. “You’re seeing if you fit in with the team and the team is seeing if you would fit in with them. When I visited LSU, I just felt so welcomed and part of the family, even though they were all strangers. The coaches were really nice and I liked what they stood for and the culture. Choosing LSU was the best decision I ever made and I haven’t regretted it for a second.

“I came to LSU as an undecided major because I really didn’t know what I wanted to do,” Rozier said. “After talking to people, I realized I’m very passionate about chemistry. I really enjoyed it in high school and I also have a lot of passion for math and physics. I figured chemical engineering was a good combination of all the classes I really enjoyed.”

Grossman, of West Long Branch, N.J., first swam at the age of 5, since she lived close to the beach. She, too, swam competitively in high school and came to LSU thanks to a scholarship and a love for the “campus and atmosphere.” She chose to study chemical engineering because she liked science and math and had a physics teacher in high school who told her she would be a good engineer because she has good problem-solving skills.

“I definitely wanted to challenge myself in school, so it seemed like a good choice,” Grossman said.

Besides their full schedule of chemical engineering classes in Patrick F. Taylor Hall, Rozier and Grossman also fit in swim practice at the LSU Natatorium. A normal week includes 20 hours of swimming, six days a week (including Saturdays), along with three hours of gym time. Three days include “a double,” which is two practices in one day. Other days, the pair practices once in the morning or afternoon. Their gym workouts include stretching, Olympic lifts and prehab to prevent injury to the rotator cuff and shoulders.

Though studying and swimming are a lot for Rozier and Grossman, they are able to strike a balance.

“On the days we travel, I plan out a month in advance,” Grossman said. “The weeks I’m not missing class, I try to be as vigilant with my work as I can and get as ahead as I can. It gets stressful around midterms and finals when you have to put in some late nights and we still practice during finals week.”

Having nearly the same class and swim schedule is a benefit to Rozier and Grossman, who have been side by side since coming to LSU.

“We’ve been in classes and practice together for all four years at LSU, so it’s really exciting to go to trials with her, too,” Rozier said.

During the Olympic trials, set to take place in Omaha, Neb., June 21-28, 2020, Rozier will swim in the 200 meter individual medley, though she also swims the 200m butterfly (as well as the 200m backstroke and 200m breaststroke if needed) for LSU. She has competed in the SEC Championships and made it to the preliminaries and finals every year. Rozier also competed in the U.S. Nationals in July-August 2019 in Palo Alto, Calif. Her best time was 2:16.52 in the 200-IM.

“I want to qualify for the NCAA in March, which is the 30 fastest collegiate swimmers in the U.S.,” she said. “I would need to train for another three months after the Olympic trials, though.”

Grossman will compete in the 100m butterfly at the Olympic trials, though she also does the 50m and 100m sprint freestyle for LSU. Her best time in the 100m fly is 1:00.68. She also competed in the SEC Championships and made it to the preliminaries and finals each year for LSU. Grossman tried to qualify for the 2012 and 2016 Olympic trials but was disappointed when her times weren’t fast enough. This year turned out differently, however.

Both are excited about the thought of making it to the 2020 Olympics in Tokyo but aren’t getting their hopes up.

“It would be really, really cool to compete in the Olympics,” Rozier said. “If I could finish out my career in the Olympics, that would be incredible. Honestly, I’m just proud of myself for making it this far. I was able to push myself and work as hard as I could, so to get there is something I’m really proud of. My parents are also really excited. They’ve been with me the whole time, always coming to my meets and cheering me on, driving me to practices at five in the morning. They’re excited to have something special come out of it. They will be at the trials.”

“Going to the Olympics would be an unrealistic goal for me,” Grossman said. “I’m just excited to have made the trials and be able to compete. This will probably be the highest level I ever compete at. It will be a really good way to end my swimming career. The trials will be the most Olympians I’ll ever be around, so it will be a really exciting atmosphere. My parents are really excited they finally get to watch me at the trials.”

Supposing Rozier and Grossman don’t make it to the Olympics, they plan on using their chemical engineering degrees to find jobs in Houston, which has become an unofficial hub for former LSU swimmers.

“Once the trials are over, I’ll be done swimming,” Grossman said. “I think it will be a really hard transition. I definitely think I’ll always swim but I’m going to take a small break. It would be awesome to spend some time in Houston to live near people I already know.”

“My dream would be to live in Houston, since I’ve been there many times for meets and it’s really homey and nice with a lot to do,” Rozier said. “Right now, I’m looking for a job where I can start getting experience and find out what I enjoy doing, since I wasn’t able to get an internship while swimming over the summer.”

With all of the time spent in the water and classroom, one wonders just what keeps these ladies going.

“I’m a very competitive person, so it’s helpful to have swimming as an outlet for any frustrations,” Rozier said. “A big part of it is being part of a team. They’re like my family. Being on a team with people you’re super close with is really fun and something to look forward to every day. You’re practicing with your best friends.”