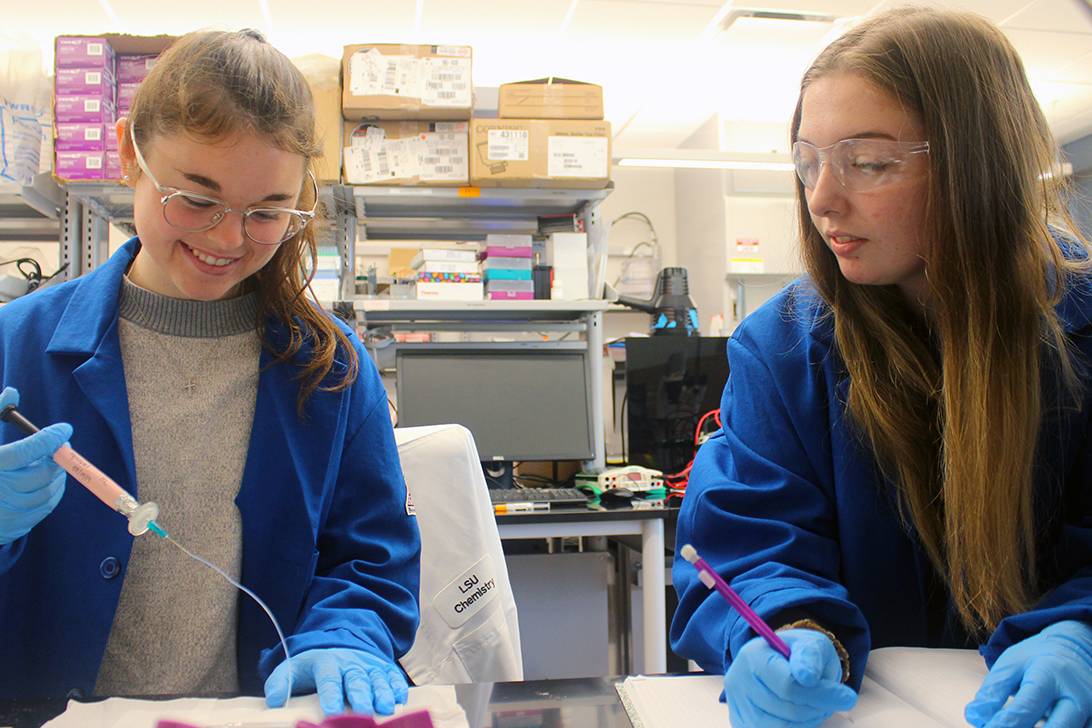 BATON ROUGE, LA – It’s no secret there are more men than women majoring in engineering and working in the field. In order to decrease this gender gap, LSU Chemical Engineering Assistant Professor Adam Melvin is working with St. Joseph’s Academy in Baton Rouge, an all-girls high school, to expose some of their students to engineering.

Each December, Melvin meets with nearly a dozen SJA freshmen and sophomores to discuss engineering and offer interested students the opportunity to work in his lab researching a yearlong project. The experience not only exposes the students to engineering, but also shows them how to maneuver in a predominantly male field.

“I’d like to get more young women involved in engineering,” Melvin said. “When I first arrived at LSU in 2015, I was a young faculty member and wanted to get involved in different areas, so when SJA asked if I wanted to mentor these young girls, I said yes.”

The SJA students who attend Melvin’s talk are part of the school’s honors biology class and want to eventually attend medical school.

“Many of them aren’t familiar with what engineers do,” Melvin said. “So, I’ve been placing them in labs that have a biology-related type of research.”

“When Adam comes to talk to the girls the first day, they’re like, ‘Wow, you do that in your lab?’,” said Jacqueline Savoia, who runs the SJA Science Fair program. “I think that our girls, or young females in general, have a lack of exposure to engineering studies. This partnership is good for LSU to get students involved and good for SJA to give them the opportunity to explore the engineering field.”

Since the partnership has grown in the last couple of years, Melvin has enlisted the help of fellow LSU Engineering Professors Chris Arges, James Dorman, Philip Jung, Jimmy Lawrence, Samuel Snow, Xiuping Zu, Bhuvnesh Bharti, and Manas Gartia. Savoia coordinates matching the students with a professor for their project.

“It’s an amazing opportunity for them to work in a lab and get hands-on experience while still in high school,” Savoia said. “Sometimes the professors branch off of the initial lab research topic and make it more specific to the students’ needs. They all do it a little differently, which is cool and interesting.”

The only requirement from SJA is that these students present their research project at the SJA Science Fair.

For some, like incoming LSU student Rachael Coates of Central, La., their project can eventually lead to state, regional, and international science fairs. Coates, who worked in Melvin’s lab as an SJA student, won first place in her category at the state science fair on a project involving immunostaining of cancer cells exposed to fluid shear stress during cancer metastasis. Coates was then invited to the International Science and Engineering Fair in Pittsburgh in 2018.

“The judges were really interested in the project because the device was so new and they really hadn’t heard of it,” Coates said. “I worked really hard on my presentation for ISEF because I’m not naturally the best presenter. Dr. Melvin helped me with that a bit.”

This year is Coates’ third summer working in Melvin’s lab, where she is continuing her work investigating the role of fluid shear stress on cancer cell mutations, in addition to helping out with a new project developing a 3D-printed plate insert for cancer cell co-culture. Though she was offered scholarships from Tulane University and Johns Hopkins University, Coates chose to come to LSU because of her experience in Melvin’s lab.

“Dr. Melvin is the reason I chose LSU,” said Coates, who will major in chemical engineering with a biomolecular concentration this fall. “I wanted to work with cancer, and Dr. Melvin was already doing that. I absolutely love working here.”

Other SJA students who are working in Melvin’s lab this summer are rising juniors Emily Marionneaux and Corrine Carnaggio and rising sophomore Evelyn Carley. Marionneaux’s older sister encouraged her to work in Melvin’s lab, since she had done it a few years prior.

“My sister said she had a really good experience in Dr. Melvin’s lab,” Marionneaux said. “She recommended I do it because not a lot of girls do labs or want to do time-consuming projects.”

Though Marionneaux plans to eventually earn her law degree, she was still interested in learning her way around a lab and researching cancer.

“I genuinely liked coming here this summer,” she said. “It’s more than science. It’s learning how to talk to professors to get ready for college. Just because it’s not something I necessarily plan on majoring in, though you never know, it’s still a really good experience.”

Since most of the assisting engineering professors are male, Melvin likes to pair each female SJA student with a female LSU Engineering student, so they can see women in engineering.

“It was cool for me to see Haley [an LSU Biological Engineering junior] do well in school,” Marionneaux said. “She’s been working with me, and it’s cool to see a girl in engineering.”

“Some of these students really end up making significant contributions,” Melvin said. “They end up learning a lot. It’s beneficial for them, so they can see what engineering is about, and it’s beneficial to the professors, because they get to mentor some amazing high school students.”

“The students love it,” Savoia said. “Some go and want to be in the lab all the time. I think it’s an amazing opportunity for young females to get involved in this career path or just for the exposure. It’s a great thing all around.”

Grants are necessary for projects, such as the one Coates is working on. Melvin recently received a $50,000 LIFT2 grant to design a 3D-printed plate insert that will enable LSU Biological Engineering Assistant Professor Liz Martin and her senior design team of students to culture multiple cells at a time, also called a co-culture, which will aid in cancer research.

“I work really closely with Liz, and she wanted her team to come up with a way to culture more than one cell line at a time,” Melvin said. “There’s a lot of interest in this, because, if you think about the cells in your body, it’s not just one cell type. There are complex interactions, but most of the standard approaches for culturing cells is just one at a time. Liz looped me in because she wanted a technology made. She’s a cancer biologist.”

“We went through several versions and ended up getting this really cool, cheap insert that we would just put into a dish and use to culture cells,” Melvin said. “It’s a lot cheaper and easier to produce than existing methods.”

Melvin is currently working with Andy Maas at LSU’s Innovation & Technology Commercialization to develop a patent.