Canaries in the Coal Mine: How Birds Indicate the Spread of Bacteria

Birds can serve as a great indicator of the long-term public health impacts of urbanization, especially as deforestation spreads and the human population booms. Birds that nest, hunt, and reproduce in urban areas are a perfect means by which researchers can collect a variety of bacterial samples present in a specific area. This information can then be analyzed and used to predict potential outbreaks of disease. LSU Department of Environmental Sciences Associate Professor Crystal Johnson studies the relationship between birds and antibiotic-resistant bacteria. 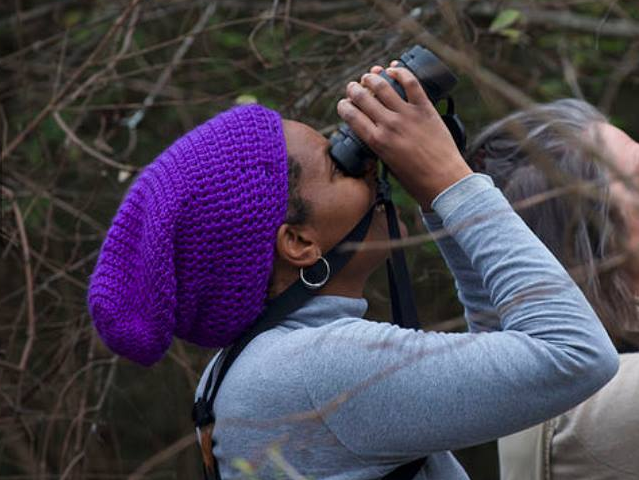 Crystal Johnson looks up into the sky through binoculars. Photo Credit: LSU

Johnson collects bacterial samples from birds captured and later released in the Bluebonnet Swamp Nature Center in Baton Rouge, La., a 103-acre conservation park in the middle of the state capital. DNA is extracted from the bacterial samples, and its 16S rRNA gene sequences are determined by the Gene Lab at the LSU School of Veterinary Medicine.

“By collecting from the birds, we are able to get a snapshot of the types of bacteria in our environment. The fact that they are culturable means we can pick up live, active bacteria on a Petri dish and find out if they are antibiotic-resistant. Typically, any pathogenic bacteria we find are not at high enough levels to cause concern. The birds are not vectors necessarily, but more indicators of what’s happening in the environment,” Johnson said.

While the birds are not carriers at high enough levels to be considered high risk, there is always some risk because bacteria do grow. In the past, Johnson has collected cloacal samples that contained large amounts of antibiotic-resistant bacteria. Also, microbes frequently share genetic information for antibiotic resistance, including with other species of bacteria, which further spreads antibiotic resistance.

As further urbanization continues, humans are increasing their interactions with these urbanized birds. Technically, if a bird were to carry antibiotic-resistant bacteria into a nutrient-rich environment that would allow the bacteria to grow and spread, such as a body of water, it could lead to an outbreak.

Data collection like Johnson’s is the first step in how potential outbreaks are detected. While her research may not be applied enough to go directly from detection to front page news, when combined with metadata from other scientists collecting bacterial samples, it could help identify hot spots or serve as a warning flag that public health officials may want to investigate further.

However, discussing her work with others often makes people unnecessarily anxious about contracting diseases.

She tells wary students: “Don't freak out. There are bacteria everywhere, and your body contains more bacterial cells than human cells. They help us digest our food and fight off infection. Your skin is colonized by good bacteria, and that allows you to fight off the bad bacteria that you encounter. Also, the more diversity you're exposed to, the healthier your microbiome, because your microbiome is your first line of defense against these incoming pathogens.”

This study is made possible by an LSU Office of Research and Economic Development Faculty Research Grant and the Louisiana Bird Observatory, which is a part of the Baton Rouge Audubon Society.