Gulf of Mexico 'Dead Zone' Smaller than Expected, but not Small Enough

The university and government scientists mapping the 2018 summer area of the ‘Dead Zone’) returned to dock on July 28 after measuring bottom-water dissolved oxygen levels less than 2 milligrams per liter (equal to 2 ppm) at 25 of 80 stations from the Mississippi River west along the Louisiana coast to Lake Calcasieu near the Louisiana-Texas border. Many other water quality and physical oceanographic data were collected along with the bottom-water oxygen values. The small size this summer is a surprisingly low area based on factors, especially the May nitrogen load from the Mississippi River that normally strongly influences the size of bottom-water hypoxia (low oxygen) in mid-summer.

The winds and waves were high at the beginning of the cruise in the area to the immediate west of the Mississippi River delta to the area off Barataria Pass, and likely mixed oxygen into these shallower waters and reduced the size of the hypoxic zone.

Persistent winds from the west and northwest in the few weeks preceding the mapping cruise likely pushed the low oxygen water mass to the east and ‘piled’ it towards the central shelf and towards Grand Isle. Similar conditions and smaller areas of bottom-water hypoxia were documented in 1998 and 2009 (areas of 4,820 and 3,360 square miles, respectively).

The northerly and northwesterly winds pushed the surface water offshore and pulled the bottom waters containing very low oxygen from offshore towards the barrier islands. A fish kill of red drum off the Port Fourchon area on July 26 was likely due to the fish being trapped in a low-oxygen water mass. The area of hypoxia (less than 2 milligrams per liter), and often anoxia (no oxygen), on the eastern part of the study area was in an unusually thick layer above the bottom and was severely low in oxygen, usually less than 0.5 milligrams per liter.

Most of the western part of the Louisiana coast was well-oxygenated from the surface waters to the bottom, and the water was not layered with fresher water at the surface and saltier water beneath. In previous years, the water layers were more stratified, which restricts oxygenation of the lower layer. Summertime low oxygen conditions are usually prevalent across the western Louisiana coast and extend into Texas.

Current models used to predict hypoxia in the northern Gulf of Mexico are robust for long-term management purposes, but they are not optimized to predict the area for years where short-term weather patterns move water masses or mix up the water column. Field measurements, therefore, remain a necessity to understand the dynamics of hypoxia and contribute to accurate modeling of a changing ocean.

Low oxygen areas are sometimes called ‘Dead Zones’ because of the absence of commercial quantities of shrimp and fish in the bottom layer. The number of Dead Zones throughout the world has been increasing in the last several decades and currently is in more than 500 coastal water locations. The Dead Zone off the Louisiana coast is the second largest human-caused coastal hypoxic area in the global ocean and stretches from the mouth of the Mississippi River into Texas waters and less often, but increasingly more frequent, east of the Mississippi River.

Hypoxic water masses form from spring to fall on this coast because the consumption of oxygen in bottom water layers exceeds the re-supply of oxygen from the atmosphere. The reaeration rate is slowed by stratification of the water column which is dependent on the river’s freshwater discharge and the warming of surface waters. Nitrogen and phosphorus from the Mississippi River stimulate the growth of phytoplankton in the surface waters. The overwhelming supply of organic matter consumed by bacteria in the bottom layer is from the downward flux of organic matter produced in the surface layer. The organic matter production rate is directly related to the nitrogen supply rate from the Mississippi River watershed. The transport to the bottom layer is the result of sinking of individual cells, zooplankton fecal pellets, or as aggregates of cells, detritus and mucus.

The annual forecast of the size of the ‘Dead Zone’ in the northern Gulf of Mexico for late July 2018 was for 6,620 square miles of the bottom of the continental shelf off Louisiana and Texas. Various models use the May nitrogen load of the Mississippi River as the main driving force to predict the size of this hypoxic zone in late July. River discharge in May was on the rise as was nitrate concentration in the Mississippi River. Nitrate concentrations continued to rise in July.

The annual measurement of the hypoxic area also provides a critical scientific record of the trend of hypoxia in the Gulf to determine whether efforts to reduce nutrient loading upstream in the Mississippi River Basin are yielding results. The observations and related research and modeling is the critical component to observe and predict if changes resulting from nutrient mitigation in the Mississippi River watershed is fruitful.

The comparative maps below show bottom-water dissolved oxygen, surface-water salinity, and surface-water chlorophyll a (estimate of phytoplankton biomass) for 2018 and 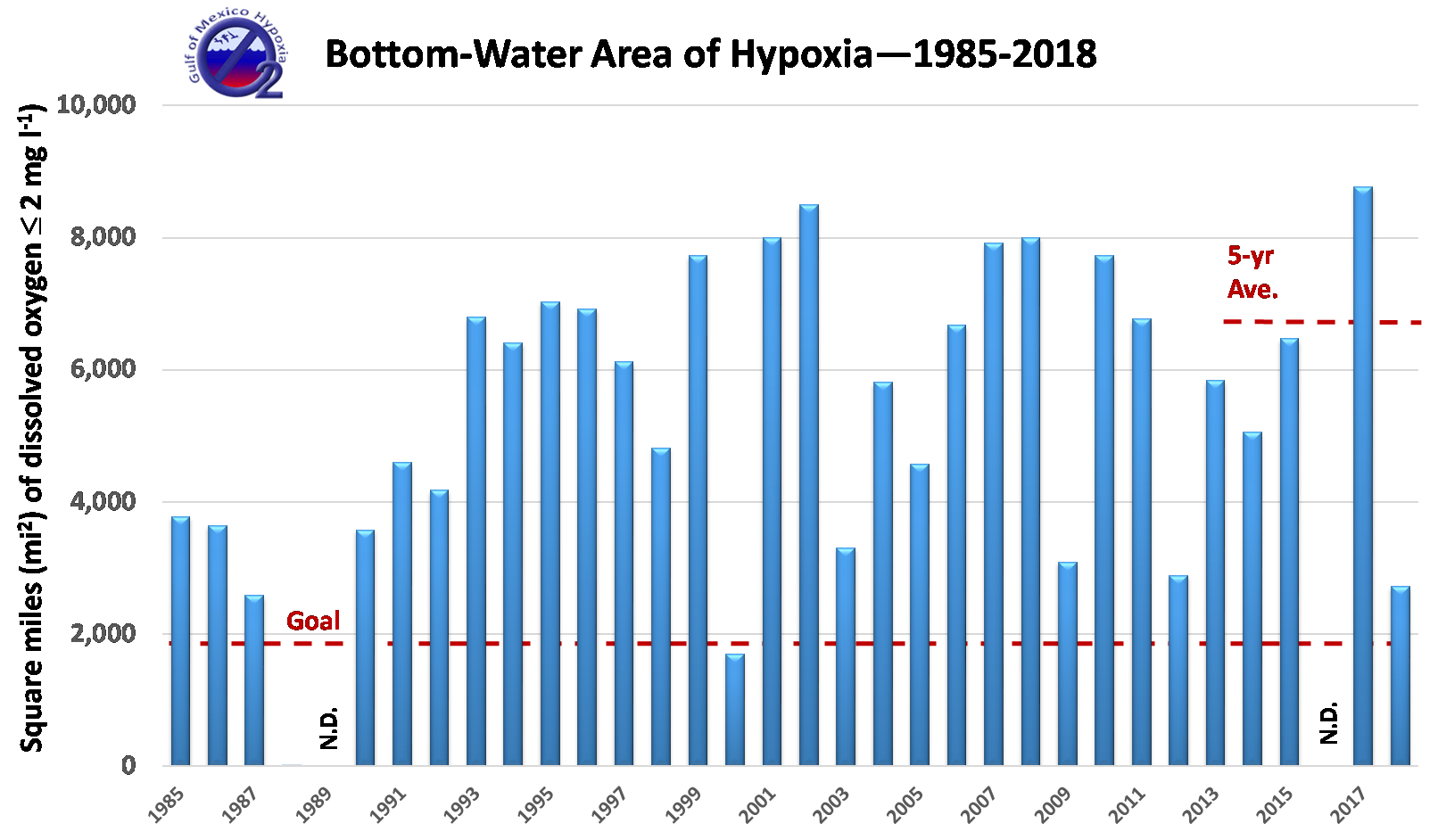 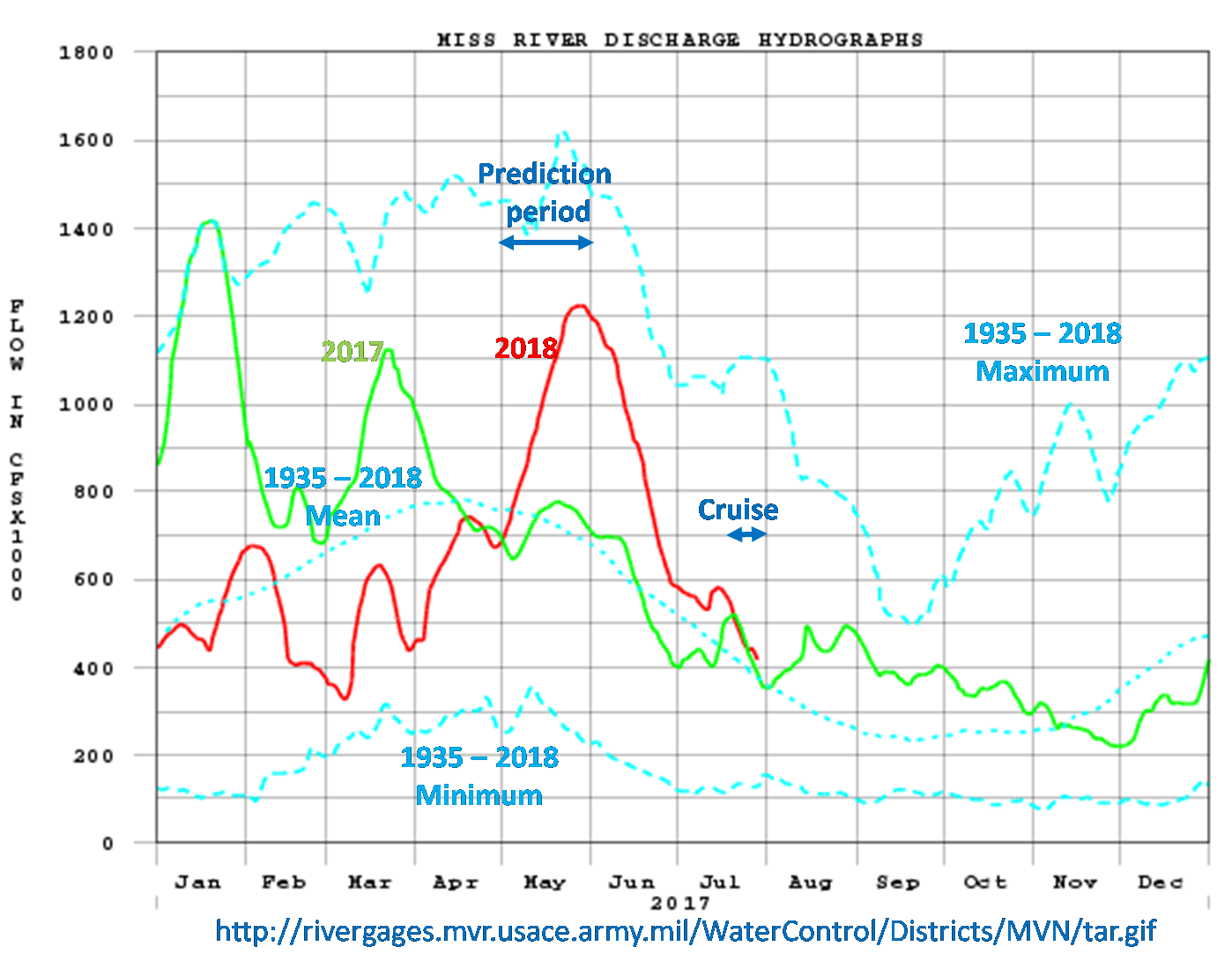 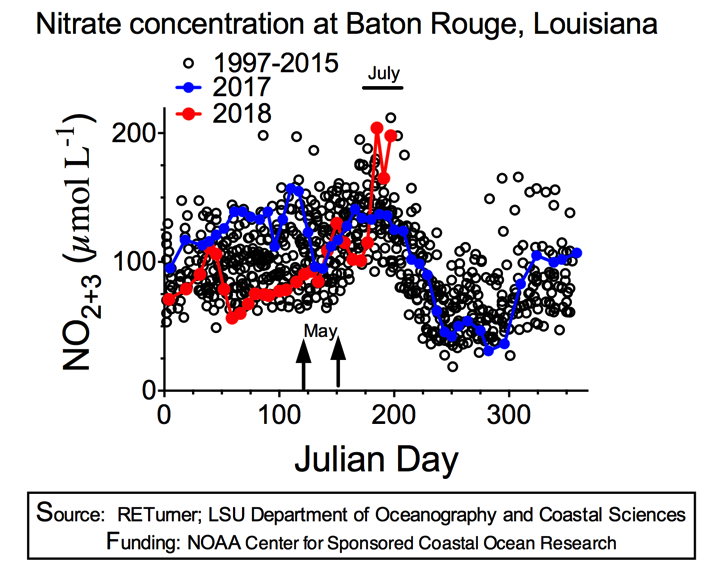 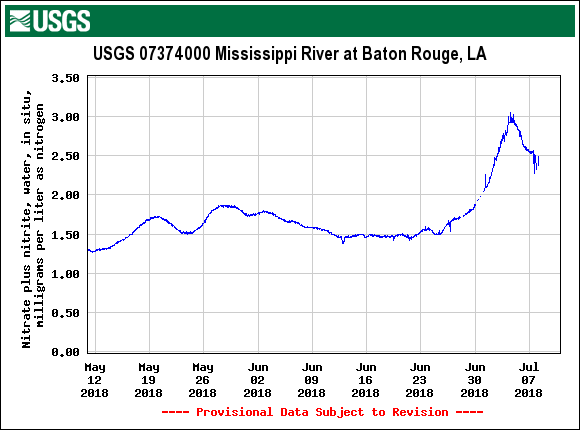 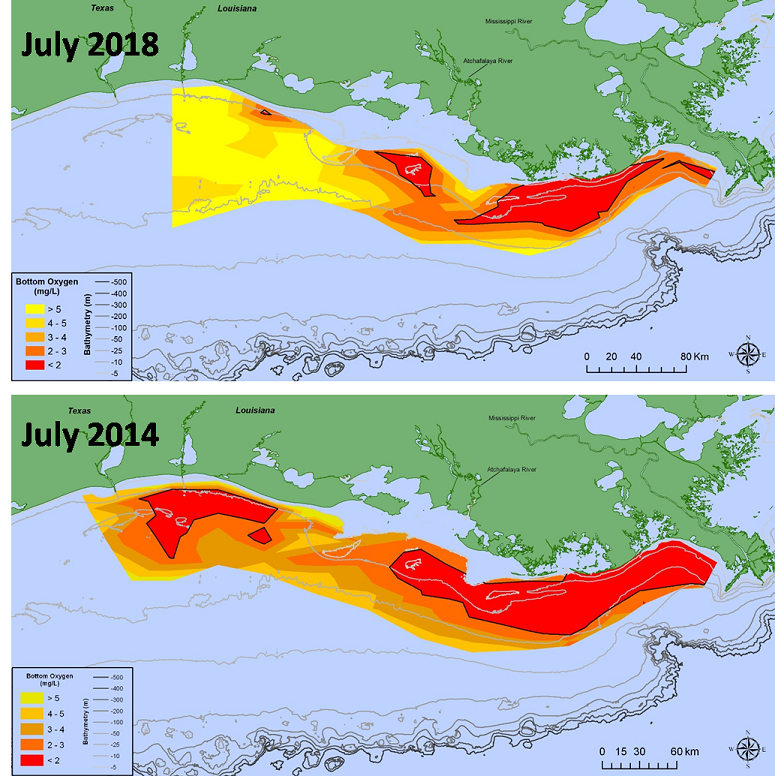 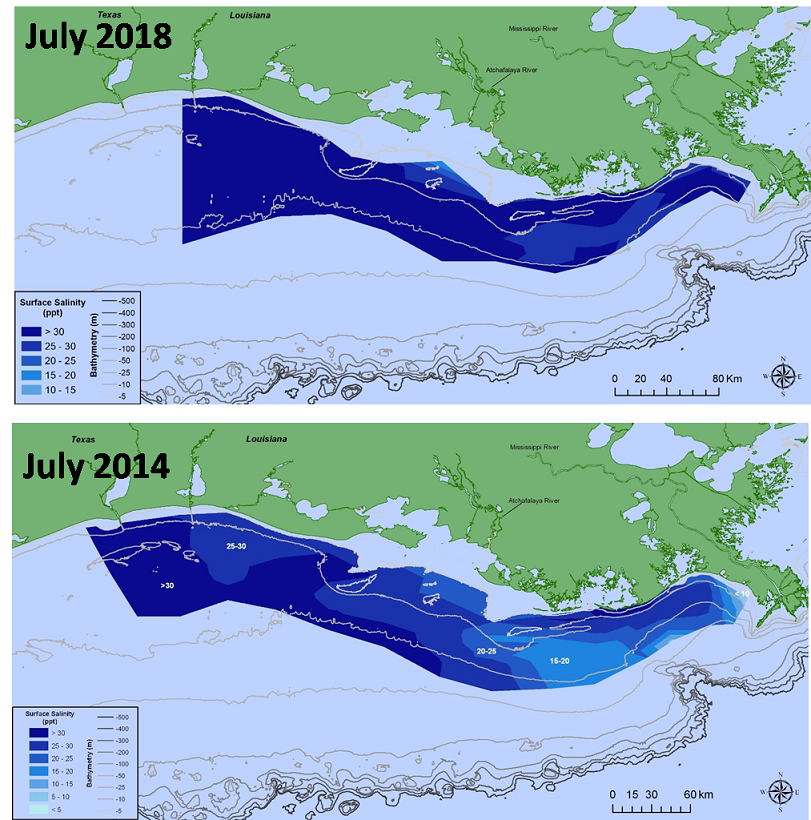 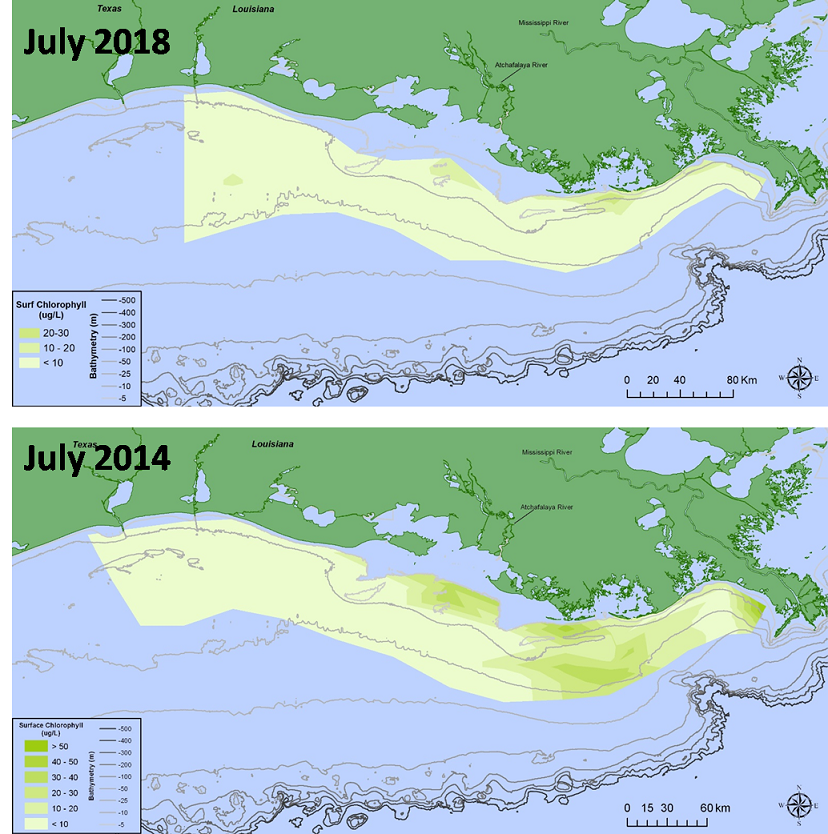