Brian Matherne’s life, from childhood to the present, has been characterized by a driving need to give back to his community. As a child, he was heavily involved in Boy Scouts and his church’s youth group and as an adult, his experiences at the College of the Coast & Environment (CC&E) have nurtured his passion for teaching.

He began his career at LSU in the College of Science, where he earned his bachelor’s in marine biology and later received his master’s in environmental toxicology through CC&E. Post-graduation, he spent some time as a laboratory instructor in North Texas and later as an environmental consultant. But, he felt something was missing. In 2015, he packed up and returned to CC&E to pursue a Ph.D. in environmental science and an eventual vocation as a professor. His true calling had led him home to LSU.

At CC&E, he began working closely with the new LSU EnvironMentors (EM) director and associate professor of environmental sciences, Linda Hooper-Bui, as one of her teaching assistants. With her guidance, he decided to participate in the after-school science mentoring initiative as a way to get involved with the community. The program pairs underserved high schoolers from Scotlandville Magnet High with LSU student mentors who volunteer two or more hours each week to work with high schoolers on a year-long scientific research project.

Matherne took to the role immediately and was quickly promoted to assistant coordinator and later chapter coordinator.

“Initially I felt overwhelmed by the idea of being responsible for what is likely the largest ‘informal’ research group on campus. As the coordinator, I’m in charge of overseeing 14 high school students and their research projects, as well as the 28 college mentors that guide them. But, my feeling of doubt turned to a sense of purpose when I didn’t want to let these students down,” Matherne said.

It has often been difficult for Matherne to balance his service as coordinator with his research and his responsibilities to his wife, two children, and aging grandfather. But, his hard work has paid off. 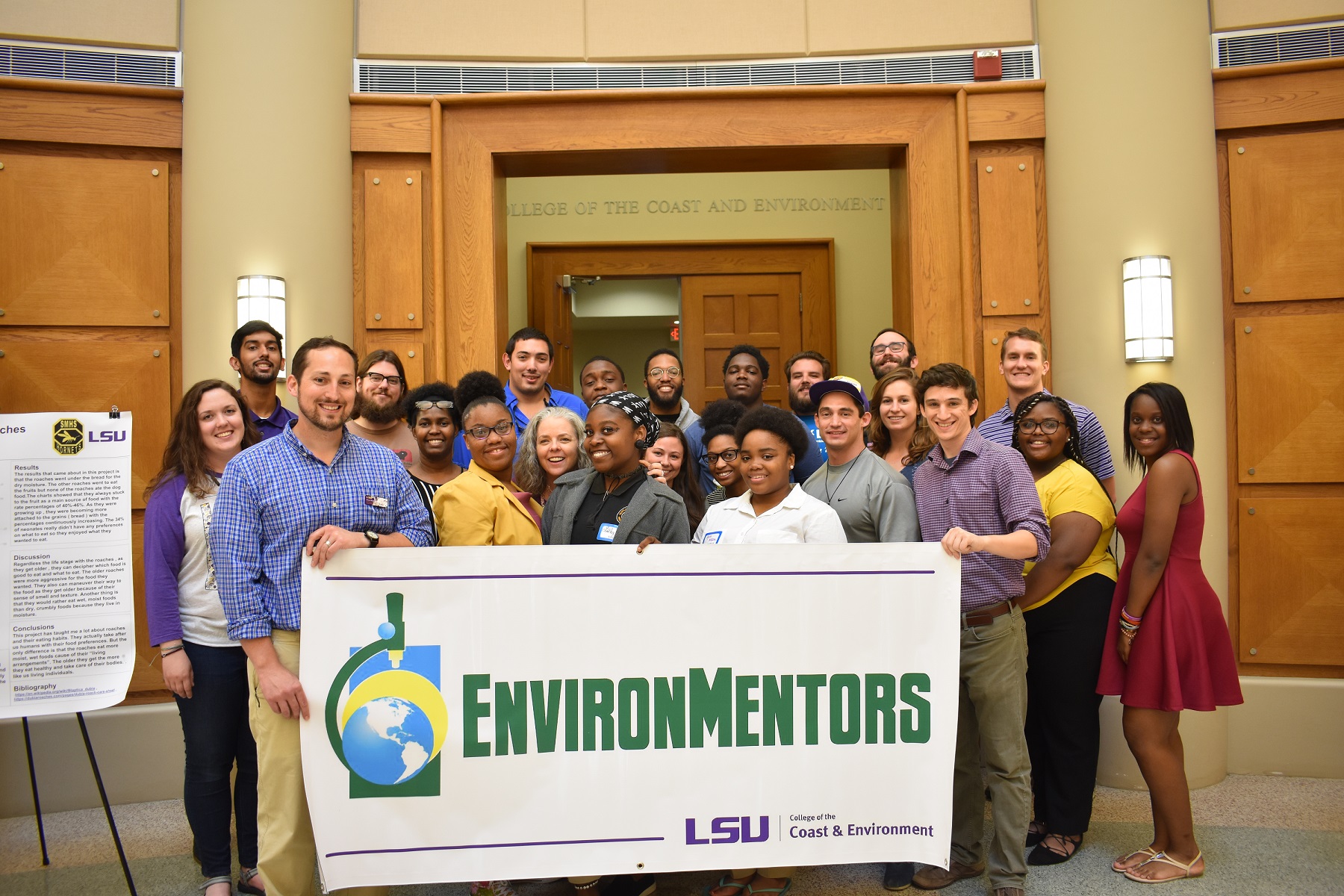 When he began mentoring, he was paired with LeAnne Riley, a bright and feisty 10th grader who was similar to himself—she was interested in everything and needed a little help focusing on an area of study. Over the years, Matherne has assisted her and her group in developing their methods and has worked with her on various presentation techniques. And as a result, in spring 2018, Riley finally earned her first trip to Washington, D.C., where she competed in the EnvironMentors National Fair.

“Watching LeAnne mature over the years has been very satisfying. She has a knack for deeply understanding her research project, but she just needed to work on her confidence as a speaker. I was proud to see her hard work and dedication pay off,” Matherne said.

In addition to Riley’s participation at the National Fair, the entire LSU EnvironMentors chapter was recognized as 2018 Chapter of the Year. This is the second time that the LSU chapter has been awarded Chapter of the Year, after previously receiving the designation in 2013. Matherne described the honor and surprise of winning the award as a “surreal moment” and he gives all the credit to the students and mentors under his tutelage.

“I’ve seen very large transitions in the ability, focus, and determination of our students. And, it’s very inspiring for me to see students that maybe didn’t have interest in science to form a passion, to feel that they can understand science at a higher level, and to feel that perhaps they want to go on and do science as a career,” Matherne said.

In keeping with his passion for teaching and community service, Matherne is fostering a joy of lifelong learning and environmental stewardship for LSU EnvironMentors—and paying it forward to future generations of environmental professionals.