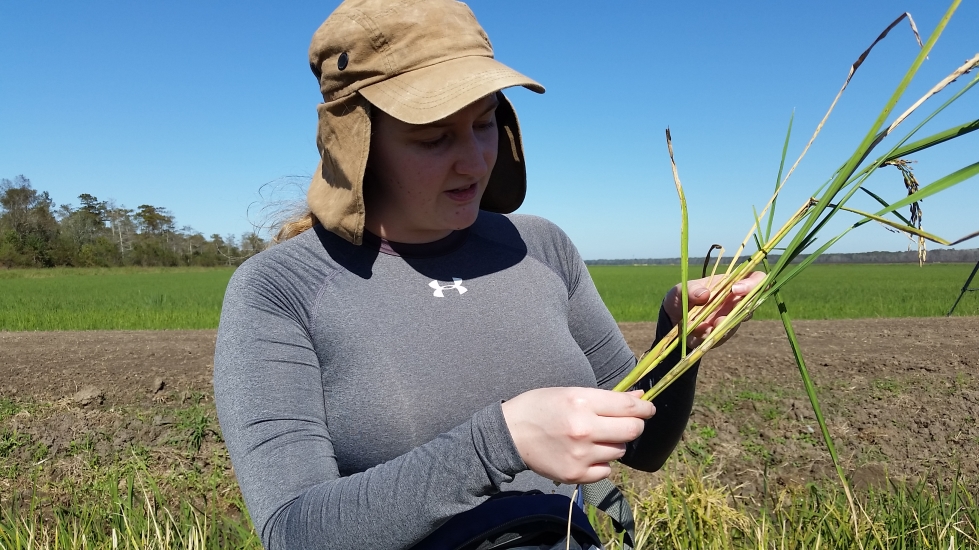 Allysson Lunos, a graduate student in the LSU College of Agriculture’s Department of Plant Pathology and Crop Physiology, first came to LSU to pursue an undergraduate degree in biological engineering.

While searching for jobs in her field, she realized she wanted a job that would allow her to work outdoors.

“Most of the jobs would be desk and more indoor jobs, and I kind of wanted to do able to get out and do things in the field, in agricultural fields,” Lunos said.

An internship at South Dakota State University inadvertently pointed her in the direction of plant pathology.

“I was studying cordgrass, and we were doing greenhouse experiments. Our cordgrass was infected with ash rust,” Lunos said. “I would get upset when the plants got infected, and my adviser suggested that I look into plant pathology.”

Lunos said the faculty in the Department of Plant Pathology and Crop Physiology has been welcoming and supportive.

Her research includes conducting a survey of rice fields in southwest Louisiana to determine the extent of Rhizoctonia solani’s – a causal agent of sheath blight on rice – resistance to strobilurin fungicides.

“The project is designed to take samples from many different commercial rice fields,” Lunos said. “We collect the fungus. We bring them back to the lab, and we do fungicides tests on
them to see which isolate from which places are still responsive to the fungicide and which ones are not responsive.”

Lunos said through the project she realized how much she enjoys working in the lab and with crop plants.

“I would like to help improve food production,” she said.

Lunos’ advice for students trying to figure out their path is to take internships or jobs that allow you to try different things.

“If I hadn’t taken that internship, I never would have ended up here,” she said.