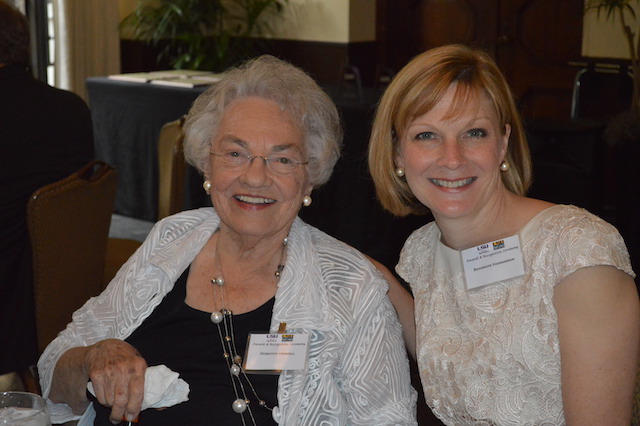 Dorothy Howell (left) and her daughter (right) attending the LSU College of Agriculture and LSU AgCenter award and recognition ceremony.

In the heyday of LSU’s home economics program, students learned and cooked in the food lab. Beyond the lab was another kitchen and a dining room with three dining room tables hugged by wooden credenzas. Artwork gave the dining room character, and an intricately set table gave the impression someone cared for this space with a great attention to detail.
That someone was Dorothy Howell. Her hair carefully done and her posture upright, she was the quintessential, polished Southern woman.
She tried to make people’s lives better, said granddaughter Shannon Hannaman. Howell would put fresh flowers in places you wouldn’t expect, and she found that by creating a positive environment, people worked harder.
Howell is often described as a woman with great perseverance and passion. She was the first female member of the LSU Tiger Band and was a willful student who completed all of her coursework for her Ph.D. — except her dissertation. She was also a teacher and the mastermind behind the university’s “Tiger Bait” cookbook.
In 1962, Howell became a professor at LSU, where she taught home economics students the value of nutrition, meal management and food preparation up until her retirement in 1983 as assistant director of the LSU School of Home Economics.
Although the space in the Human Ecology Building has changed since her retirement, you can find past treasures of the mid-20th century scattered in today’s food lab now overseen by instructor Judy Myhand, who was Howell’s former student and beloved friend.
“I believe in the pleasures of dining, and that's something Dorothy believed in also, so I try to teach that to my students so that they spread the importance of the family table,” Myhand said.
The home economics curriculum became important during the Great Depression through the Domestic Reform Movement. This was a time when rural communities began to seek employment in larger cities, ultimately separating families. Fear spread that women would lose their domestic skills passed down from their maternal lineage.
During Howell’s undergraduate years from 1939 to 1942, she learned to design furniture, make a blueprint for a future home, create a skirt out of an old pair of men’s trousers and manage money.
As a senior, home economics majors were required to intern for nine weeks at one of two home management houses on campus — the Helen Carter and the Agnes Morris houses — where they were taught to clean, do laundry, cook meals and host guests.
“That’s when home economics developed, to be able to make the most of family resources no matter what they were … We were taught to make do with whatever we had,” Howell said in an Oral History recording of Hill Memorial Library’s exhibition, “A Lady in the South.”
While her boyfriend of the time was in the Air Force, Howell pursued a home economics master’s degree at LSU from 1942 to 1944.

Upon her boyfriend's return from World War II, the two married and had two children. He subsequently left, “which was horrendous back then to be a single woman and not have a husband,” Hannaman said.
With a suitcase and her children in tow, Howell moved from Shreveport to Baton Rouge in 1962 and bought a house in University Hills and devoted her life to teaching, the university and her children.
“She was very persistent,” Hannaman said. “She loved chemistry and to entertain, so I think her love of chemistry and bringing people together is what drew her to home economics.”
Homecoming Day on Oct. 9, 1976, “Tiger Bait,” the first cookbook created by a university, went on sale. For $5.75 plus 75 cents for postage, you could have 617 recipes from more than 1,000 university alumni and friends.
Howell, along with the LSU Alumni Federation and LSU Home Economics Alumni Association, worked tirelessly for four years to create the cookbook, proceeds from which contributed to more than 125 scholarships for College of Agriculture students.
An innovator with a drive to serve others, Howell was also the force behind “Hot Beverages from the Bayou Country,” instant coffee and tea drinks with names like “Swamp Fire” and “Creole Coffee” which were developed in 1973 by the LSU School of Home Economics alumni. Sales from the packages benefited the organization’s scholarship endowment fund.
“Her mantra was that in all circumstances, regardless of the situation, be kind and considerate, consider others’ needs, their origin — where they come from,” Myhand said at the dining table in the modern food lab.
After her retirement in 1983, Howell worked as a chaperone for university students traveling to Europe and continued to be “a constant positive force,” Hannaman said.
Howell was invited as a guest lecturer for 10 years at Tulane University School of Public Health and Tropical Medicine after she co-authored a nutrition curriculum guideline for elementary schools for the Louisiana Department of Education.
In 2015, the LSU College of Agriculture Alumni Association recognized Howell as an outstanding alumna.
Dorothy Lois Howell passed away on Monday, February 26, 2018, at the age of 95.
Writer: Hannah Venerella
LSU
©