Laying the Groundwork for Effective Communication with Ry’yan Clark 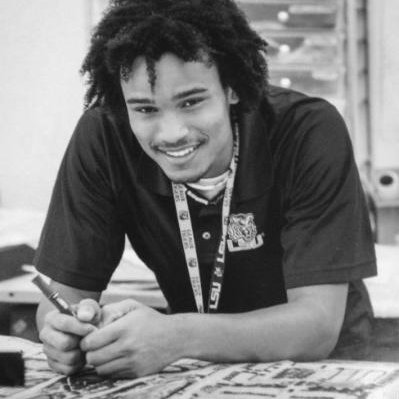 LSU landscape architecture major and Distinguished Communicator candidate Ry’yan Clark is spending his last year of LSU undergrad studying the effects landscape architecture can have on the world around us. Through his capstone and course research projects, Clark is taking on topics ranging from the correlation between landscape and natural disasters and conceptualizing future neighborhoods without cars.

We spoke with Clark to find out more about his projects and his plans for the future.

In a more conceptual project engaging what-ifs and future realities, Clark’s capstone focuses on visualizing what a neighborhood would look like 30 years into the future if cars were no longer present in society. Using an actual neighborhood in New Orleans, Clark is looking at how the removal of gas stations, repair shops and retail maintenance stores will impact the community and how those spaces could then be used for other things. Along with that, he says, there would no longer be a need for driveways or parking garages, which in turn would directly impact the design of homes.

Along with his numerous projects, Clark is also a part of CxC’s Distinguished Communicator program to train for versatile and effective communication about his landscape research. Clark says he connects to visual communication the most because he can quickly draw conclusions based on the direction of images or the tone of the composition. But that doesn’t stop him from using other communication modes.

As president of the LSU chapter of American Society of Landscape Architects, Clark is required to communicate with industry professionals and fellow students to coordinate events, which calls for a mix of all communication styles, including oral, written, technological and visual. Before joining the Distinguished Communicator program, Clark admits that writing was not his greatest skill. But through his participation in the program he now sees the benefits of written communication. He said, “After being forced to write more with a specific position, I have found that it forced me to think more critically. And that ability to think more critically has made me a better designer.” While the Distinguished Communicator program helped Clark improve his written skills, he said the most unexpected result of participating in the program was, “realizing that all communication skills individually influence each other and make them better as a result.”

Clark is set to graduate in May 2017 after completing the 5-year landscape architecture program at LSU. When he graduates, he hopes to get involved in community engagement, public planning or policy. Also drawn to stormwater management and social justice issues, Clark can see a future in design and urban planning, respectively.

His hopes for the field of landscape architecture are just as big as his personal future plans. He says, “I would like the profession to continue advocating for better stewardship of the planet and inform more people about what we can do to help the planet.” As a landscape architect, Clark embraces the opportunity to engage people with nature. He hopes that he can connect the community and his work to address climate change and its repercussions.